The latest film to be titled American something is a documentary which takes place in Dayton, Ohio on the site of the old General Motors factory after it’s reopened by Chinese glass manufacturing giant Fuyao. This is the story of how the factory’s owners and workers adapt, and a snapshot of the runaway train of globalisation. 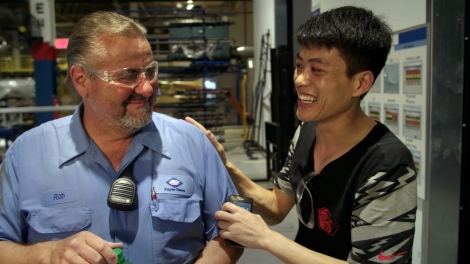 American Factory takes an objective look at events, with a remarkable level of access to both senior management and workers on the factory floor. With no narrator, its strictly fly-on-the-wall style lets viewers make up their own minds, and it possesses a surprising lightness of touch given the political slant you’d expect from the new Obama production company.

Fuyao’s Chairman Cao has a grand vision for a factory with Chinese-level productivity in the American rust belt, but he quickly comes up against unexpected barriers like health and safety regulations, trade unions, and workers who don’t want to work 12 hour days. The initially affable Cao is soon promising to crack down on pro-union workers and practically rubs his hands with glee when being told how many people have been laid off thanks to new machinery.

When some of the plant’s American workers visit China it quickly becomes apparent they will never catch up. The Americans are left stunned by their colleagues’ drive and discipline, and a company event even features a comically absurd song and dance number about efficient production. Meanwhile the Chinese managers struggle to comprehend Americans’ need for encouragement (“a donkey likes to be stroked in the direction of its hair”) and the inefficiency of their “fat fingers”.

But on the factory floor touching bonds develop between American and Chinese workers, as the former come to realise their immigrant co-workers don’t have it so easy, working for low wages far from home. The Americans are discouraged from unionising by an employee relations consultant, but the Chinese are kept in line by being told their work is part of a patriotic duty to improve perceptions of China abroad. 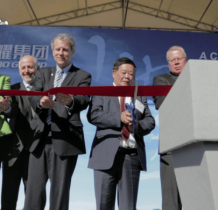 It highlights the catch 22 of the forces that took away the Americans’ old jobs offering them new ones on lower pay for a foreign company that expects more of them. Yet it’s also clear that without Fuyao they wouldn’t have jobs at all, explaining some employees’ reluctance to unionise and alienate their new Chinese bosses.

The extent of the Obamas’ involvement is not clear (they don’t appear in the credits) but assuming their audience will be primarily on the liberal side, this does an excellent job of drawing attention to the causes of disgruntlement among American blue collar workers for anyone who still thinks Trump was only elected because of racist deplorables. It’s also well made with some great cinematography and an effective score which keep it engaging .

And in spite of the culture clashes, management issues and wildly different attitudes to work, the big ellipses at the end is automation, which threatens Chinese and American workers alike. After showing the struggles some older car factory workers have in adapting to making glass, the unanswered question is how will they adapt when factory jobs disappear altogether? This is the real issue we should be concerned with, and the real product of American Factory.

American Factory is on Netflix.