Welcome to the first of 5 reviews from FrightFest 2019, a wonderful horror festival and unofficial singles convention. 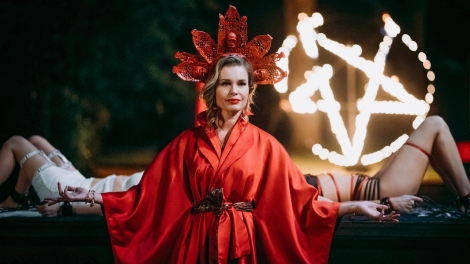 Described by its director Chelsea Stardust as a “punk rock satanic Wizard of Oz“, Satanic Panic sees delivery girl Sam (Hayley Griffith) take pizza from the oven to the coven. Written by the great Grady Hendrix, the ensuing madness plays out like Scream Queens as directed by Sam Raimi.

Sam herself is a classic Hendrix protagonist insofar as she’s a capable woman in a menial job, but she can’t help appearing passive and underdeveloped. Her backstory doesn’t lead anywhere and her quirky bunny obsession leaves her feeling a bit like Brie Larson when you want her to grow into Stieg Larsson.

What the film does brilliantly is campy, colourful, female-centric horror-comedy, featuring a relished Ryan Murphy-style turn from Rebecca Romijn as the High Priestess. Dialogue can make (Heathers) or break (The Craft) this kind of teen movie, and Hendrix has the wit to make Satanic Panic really pop.

Hendrix and Stardust deliver a deliciously self-aware satire of the contemporary culture wars (“Your generation doesn’t understand sacrifice!” hisses Romijn), anchored by the joke of Sam only being dragged into this hell because the wealthy coven refused to tip her for the pizza.