This documentary follows people who have chosen to climb down the corporate ladder and embrace a life of minimalism, in which every possession and action is justified in terms of in terms of the happiness it brings rather than as a measure of success. 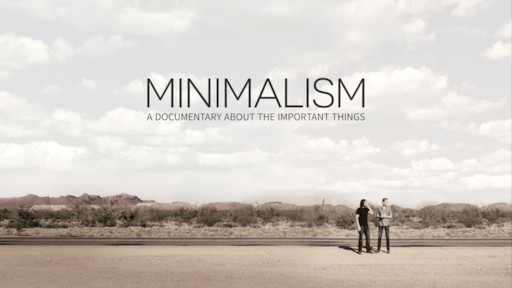 The main subjects, Ryan Nicodemus and Dan Harris, both had high-flying careers and found themselves with everything they were supposed to want, and yet were still unhappy. After sliding back down the greasy pole and divesting themselves of all but the most essential possessions, their hardcore minimalist principles (one interviewee has only as much stuff as he can carry onto a plane with him) are reminiscent of the recovering alcoholic who can never touch another drop. Those who bought in most to the maximalist ideal lurch to the opposite extreme in response.

Like Supersize Me it uses the hook of a radical lifestyle choice as a way to explore wider issues like phone addiction and advertising to children. It looks at our consumerist society, interviewing experts in human psychology and economics who show that, beyond a certain level, the adage that “money can’t by you happiness” is true.

Yet in spite of the fact the consequences of our rampant consumerism should be widely understood, the rate at which we continue to buy suggests this message needs reinforcement. So while much of what they say isn’t or shouldn’t be revelatory, there are clearly people who need to hear this message, and as such this film is both timely and important.

It ends with a remarkably honest speech against materialism in 1976 by Jimmy Carter, probably the most prescient US President of the 20th century:

“Human identity is no longer defined by what one does, but by what one owns. But we’ve discovered that owning things and consuming things does not satisfy our longing for meaning. We’ve learned that piling up material goods cannot fill the emptiness of lives which have no confidence or purpose.”

Minimalism is available on Netflix UK.