It’s hard to review a Woody Allen movie in the current climate without it seeming like we’re trying to make a point, so please rest assured there is no point. 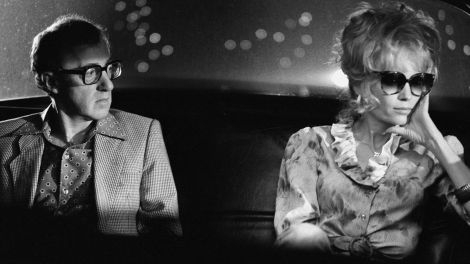 This New York-based comedy opens with a group of kibitzing comedians telling the story of legendary Broadway talent agent Danny Rose (Allen), whose client portfolio reads like an episode of Britain’s Got Talent: a blind xylophonist, a singing parrot and a lounge crooner (Nick Apollo Forte) who falls in love with the superstitious Tina (a brilliant Mia Farrow).

Broadway Danny Rose was released in 1984 but it could have been the ’60s, so timeless is Allen’s black-and-white affection for Danny’s rose-tinted view of the industry. A hapless optimist, he embodies the old joke about the circus roustabout cheerfully scooping up elephant shit, and when asked why he doesn’t get a better job replies: “What, and leave show business?”

Allen’s fondness for his old vaudeville days lends the picture a personal, nostalgic warmth, though your tolerance for his uber-talkative, talmudic schtick will determine whether you find him charming or like watching an alternate universe where Quentin Tarantino makes himself the main character in all his films. Regardless, Allen’s blending of criminal, romantic and showbiz elements make for an engaging, surprising story that perfectly encapsulates the quirky Woody Allen appeal that many have tried and failed to replicate. Woody Allen especially.

It helps that Allen doesn’t date a younger woman in this one (although there is an awkward moment where he jokingly asks a 12-year-old girl if she’s married), while having comedians play themselves feels like a precursor to Louie, the show Louis C.K. made before being told to stop sexually harassing women. “What, and leave show business?”