Roy McBride (Brad Pitt) is an accomplished astronaut living in the shadow of his esteemed father (Tommy Lee Jones) who never returned from a mission to Neptune several decades earlier. When dangerous power surges come from the planet, Roy is enlisted to help contact his missing parent and find the source of the disturbance.

Ad Astra continues with the flawless visuals we have come to expect from serious space movies with Mars shots to rival The Martian, weightless space action to rival Gravity and extra-terrestrial cinematography at least in the same league as Interstellar. It’s really seamless and an immense amount of credit is due to director James Gray and cinematographer Hoyte Van Hoytema.

The story begins with a brilliantly shot, vertigo-inducing sequence on a giant space antenna that I wanted to know more about. It then follows a roughly similar structure to 2001: A Space Odyssey, with a casual visit to the moon before a more taxing journey to the far reaches of the solar system. But rather than the optimism of the 1960s it has the cynicism of the 21st century with an altogether less positive vision of our future in space, exemplified by a Subway on the moon. 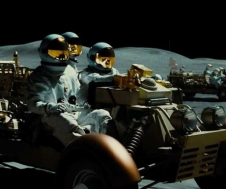 It’s interesting enough, but has no substantial characters other than Roy. This is presumably to emphasise both his solitude in space and how lost he feels after being abandoned by his father. But rather than letting the silence speak for itself, it relies heavily on voice over to tell us what’s happening throughout, a pet peeve of mine.

It also features a surprising number of unnecessary religious references on the way to a conclusion that’s both bold and unsatisfactory. However, the quality of its visuals, the scale of its ambition and a decently paced and intriguing story make this well worth a watch for any space fan.