Christian Bale shows us his Dick and Sam Rockwell his Bush in Dick Cheney biopic Vice.

Surprisingly for a movie that exceeds 2 hours (but unsurprisingly for the director of Anchorman, Bankerman AKA The Big Short and now this: Wankerman) the film tells us nothing we don’t already know: only that the Vice President engineered the war in Iraq while tied to oil corporation Halliburton, which is as fishy as it sounds.

Adam McKay can’t decide if he’s making a polemic or a biopic, opting for an approach that’s less Michael Moore and more Michael Bay in terms of its grinding, mechanical bluntness. He spoonfeeds us a version of events that’s simplistic in the extreme (via nonsensical narration by Jesse Plemons and visual metaphors so painful they’d make Guy Ritchie blush) with characters introduced all the way through the movie, often more than once. 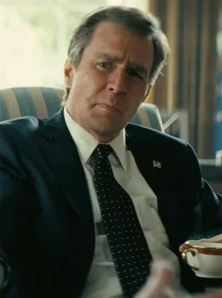 This isn’t to fault a committed and resolutely unflattering portrayal by Bale, an actor who fluctuates in size more than Ant-Man. They could have saved him the trouble and cast Chevy Chase, who has the twin advantages of looking just like Cheney and being an arsehole. In failing to examine the VP’s motivations, Vice wastes an uncanny performance by never allowing Bale to do any proper acting. But this isn’t a proper film. It’s an almost wilful mess and tonal nightmare, as unfocused as it is unfunny.

The movie makes a gag out of the level of conjecture required in telling the story of such a secretive man: “We did our fucking best,” it jokes. Not good enough as it turns out. Ironically for a film condemning Cheney’s manipulation of intelligence Vice is seriously lacking in that department, resulting in a picture that makes its subject look far smarter than the filmmakers. How’s that for a vice?