This new horror movie is the third film called Ready or Not in the last 10 years – although in parts of Canada it has the scarier title of Prêt pas prêt, French for “our sandwiches will kill you.” 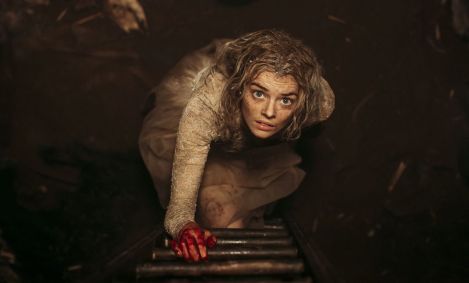 After Grace (Samara Weaving, niece of Hugo) marries the Kushneresque heir to a boardgames empire (Mark O’Brien), she’s thrown into the most dangerous game since The Most Dangerous Game – a deadly round of hide and seek at the hands of her wealthy new family. The ensuing 90 minutes are better than a film with such a daft premise has any right to be, nailing the tonal balance, well-drawn characters and social commentary so that everything falls into place like a jigsaw with really sharp corners.

The ultimate in-laws-from-hell movie, Ready or Not plays like Get Out except about class instead of race. The rich are incompetent characters whose motivations are selfish yet clearly defined, giving the movie an internal (if not external) coherence. Equally Grace acts in an un-horror movie-ish way throughout, resourceful and forceful like women in these kinds of films aren’t. Usually the foul-mouthed smoker with attitude is a side character, but here she takes centre stage in a standout portrayal by Weaving.

It’s also great fun watching Dave Rygalski from Gilmore Girls and Andie MacDowell as a badass matriarch, bringing the perfect level of camp-macabre to Guy Busick and R. Christopher Murphy’s screenplay – that’s a different Ryan Murphy, confusingly similar to his namesake’s work in the genre. Matt Bettinelli-Olpin and Tyler Gillett’s direction moves like a crossbow bolt and looks like a well-warmed hell-house, glowing gothic in the candlelight.

Spattered with wince-inducing bloodshed and escalating to an explosive ending, Ready or Not succeeds in mixing games, horror and class war where ‘Trump the Game’ failed horribly.