As part of his final world tour, the original child star Tuntankhamun comes to the Saatchi Gallery in London before taking up permanent residence at a brand spanking new museum by the Gisa pyramids in Cairo, the Las Vegas of Egyptian artifacts. Except he can’t go there to die because he’s already dead. 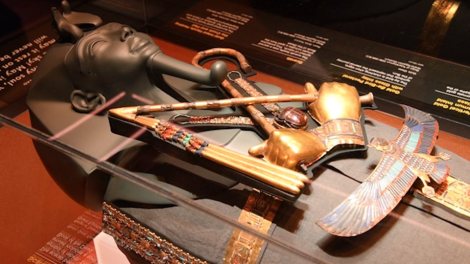 Unfortunately anyone hoping to see a mummy in London will have to watch The Mummy because King Tut doesn’t appear in person, having been left to a surprisingly dignified rest in his actual tomb. What’s on display is a selection from the vast hoard of riches assembled to put him in the best possible stead for the afterlife, including weapons, clay servants and linen gloves. Let’s hope he doesn’t actually need them.

There’s a sense that the Ancient Egyptians weren’t quite sure what to expect, so left no stone unturned, assembling an antiquarian Argos catalogue of Egypt’s must-have items. The exhibition covers the history of the boy king, who ascended to the throne at the age of nine after the death of his daringly monotheistic father Akhnaten, following a level of in-breeding which makes our royal family’s gene pool look Olympic-sized by comparison, leaving the Pharaoh plagued with health problems.

But it also covers the tomb’s discovery by Howard Carter and Lord Canarven, and the groundbreaking excavation effort that followed. As a result the tomb contents is incredibly well preserved, and it’s hard to believe most of the items are three and a half millennia old. The famed death mask doesn’t feature, although that doesn’t stop them merchandising the Duat out of it in what can only be described as a pyramid scheme. There’s a lot of money in mummies, after all.

While it does make you think about how long after someone’s death it’s acceptable to raid their tomb and display a photo of their corpse, I came to view it as a very good thing that the work of so many wonderful craftspeople, with little option than to work in servitude to their autocratic god-king, gets to be so widely appreciated.

The exhibition is well designed to cater for Cleopatra-sized crowds with multiple descriptions of items and ample space, but presents a somewhat romanticised view of the Pharaoh and how he will live forever in the public consciousness. Yet the rich display of items speak for themselves, and are guaranteed to make you say Tut alors!

Tutankhamun: Treasures of the Golden Pharaoh is at the Saatchi Gallery until 3 May 2020.