It’s the first in our new series where we’re reviewing all the films in the Universal Dark Universe!

It begins with the discovery of an Egyptian tomb in London (yes, London) during the construction of Crossrail, by a man with ‘Investigator’ written on his coat. The film then leaps from self-important mystical scene-setting to a buddy comedy set in Northern Iraq (yes, Iraq). Tom Cruise plays a grave robber called Nick (geddit?) who’s fighting his way into an Isis stronghold (yes, Isis, well “the insurgents” so they don’t get offended) with wacky pal Chris (Jake Johnson), where he discovers another Egyptian tomb (“Oh my God. It’s Egyptian”).

Here he meets bland pebble brusher Jenny (Annabelle Wallace) who reveals that the pair have been going to towns which are about to be invaded and stealing their historical artifacts, knowing “the insurgents” will destroy anything ancient in the city and cover their tracks. They then donate the pieces to museums so these treasures aren’t lost to the world. Only joking, they sell them on the black market.

Cruise’s character seems to be going for a kind of Han Solo/Iron Man/Star Lord style lovable bad boy. Except instead of giving a laid-back, fun performance like Harrison Ford he gives an intense, creepy performance like Tom Cruise. And Han Solo is a smuggler under an oppressive empire. Nick steals things from war victims. He has the charm of a plant pot and the respect for private property of Pol Pot. 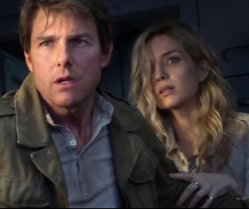 The sorry band awaken a fearsome (but sexy) mummy (Sofia Boutella), who, in return for immortality, must summon back the God of the Dead. She turns comedy sidekick into a comedy zombie sidekick before Nick and Jenny make their escape while exchanging unpleasant sexual banter. Though she’s initially hostile, Jenny sees good in Nick, in spite of the fact he leaves her for dead more than once and when she says “hieroglyphic” he says “I’m not interested in your archaeology jargon”, making a sizeable majority of the audience realise they’re more intelligent than the main character.

Because this is part of a shared universe we have to meet the other characters, most notably Dr Jekyll (Russell Crowe), a Victorian Nick Fury (Vic Fury?), speaking the most absurdly formal English. That is until he turns into Hyde at which point he starts talking like Ray Winstone. In The Departed.

It doesn’t suffer from having no monster in it, like I, Frankenstein, but the over-explained plot, less-than exceptional special effects and messy tone add up to a film which is markedly worse than Dracula Untold, the since-disowned first entry into the Dark Universe canon.

Much of the film is set in London, resulting in the destruction of the Natural History Museum in an apt metaphor. And eventually the film ends as it began, with clumsy exposition, as it tries to set up a universe, enticing us with the promise of “good vs evil….who will win?”. I can’t wait to find out.

6 responses to “The Mummy”