In perhaps the earliest ever courtroom drama Joan, or Jeanne, of Arc (Renée Jeanne Falconetti) is on trial following her failed attempt to lead the French against the invading English, in this silent film from Vampyr director Carl Theodor Dreyer.

The trial begins with the most important matter, her dress sense, then moves on to her relationship to the devil, as the monks and officials urge her to renounce her claim to divine appointment.

Say what you like about the decision to hand control of your army over to a 15 year old farm hand, any young girl who convinced so many people to follow her in 15th Century France must have had some chutzpah. Falconetti brings this to the screen with a staggeringly emotive performance, carrying almost half the film on close-ups of her face, with a haunted, ethereal expression. 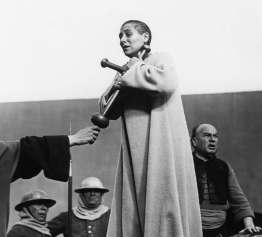 The character cries a bit too much in my view – surely the real Joan was made of sterner stuff – but it’s an undeniably powerful performance, eschewing the grand gestures often associated with silent films for a tight focus on facial expression. Made within a year of Napoleon, the two silent films about French history could scarcely be more different in their approaches.

One of the highlights for me was the beautiful, delicate piano score. But unfortunately the film has been scored numerous times and I have no idea who wrote it or when – other than it was almost certainly nothing to do with the original production (if you’d like to hear it the version I watched is on BFI Player).

Elements of the story feel very forward looking, from the scathing criticism of the religious order desperate to see Jeanne burned, to the story of a woman’s femininity being put on trial. Unsurprisingly it was highly controversial when it was released. It’s also expertly paced, with a claustrophobic beginning in the church where Jeanne is tried, building towards an epic ending at the exterior of the building as a battle rages around Jeanne’s death. The result is a striking historical drama and a saintly entry into the silent canon.