When an American naval officer (Danny Huston) lands on the shores of Feudal Japan, a daimyo (Hiroki Hasegawa) sends his army on a 36-mile footrace to test their mettle that soon spirals into a bloody test of metal. 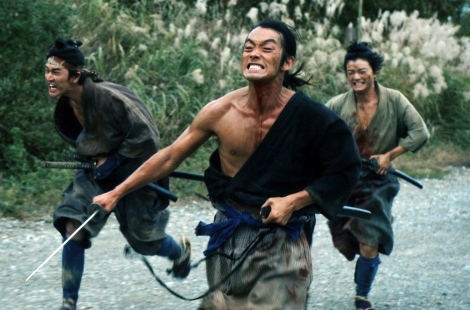 Based on a real event from 1855 that became the origin of Japan’s national marathon, Samurai Marathon may be the original Japanese gameshow. At once a study of isolationism and globalisation as well as a quirky samurai comedy, this is a strange film that covers a strange chapter in history. The clash of styles fits the clash of cultures, though the movie takes a while to find its footing and juggles too many characters without spending enough time with any of them.

But what Samurai Marathon lacks in emotion it makes up for in cultural intrigue, picking up pace when the marathon begins halfway through the picture. The participants include a samurai trying not to win like Jeremy Corbyn or Eurovision nations who can’t afford to host the contest, and a Mulan-style princess (Nana Komatsu) sneaking out to join the men. The result feels like 47 Ronin meets Rat Race, and remains as incongruous as that description implies.

It shares with Candyman a director (Bernard Rose) and composer (Philip Glass), whose East-meets-West score combines with Takuro Ishizaka’s gorgeous cinematography to dazzling effect; not since At Eternity’s Gate have natural colours appeared so vibrant. In contrast to the bloodbath of Takashi Miike’s Thirteen Assassins (from the same producers), Rose uses violence sparingly and comically but never quite carries the humour across the finish line.

A cinematic oddity about a historical curiosity, Samurai Marathon is confusingly told but successfully delivers the most eccentric footrace since 2013.