The second chapter in The Purge series finds us in 2023, when Purge night (the annual 12-hour event when all crime is legal) has saved the economy. Because apparently the only white-collar crime going on is producers Michael Bay and Jason Blum ripping everyone off. 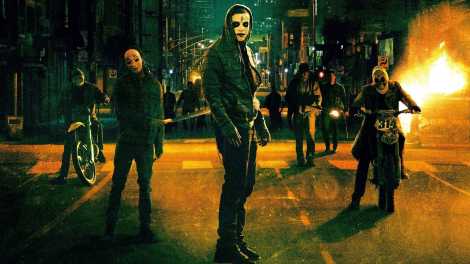 At least they wore their face masks.

James DeMonaco’s idea that everyone would immediately start killing each other but nobody would think to commit embezzlement with impunity represents a fundamental flaw, flagrant classism and zero imagination. The focus on violent crime is understandable for generic reasons, but it seems a missed opportunity to explore the fact that all crime is legal when every sequel seems to be a group of people surviving another Purge night. At least have them rebel against the system like The Hunger Games, rather than just breaching lockdown and getting away with it.

This time the Dominic Cummingses include Carmen Ejogo and Zach Gilford as Los Angeles residents caught up in the carnage. They manage to stay surprisingly calm, perhaps due to the disappointing tameness of the event or maybe because this is the sixth annual Purge night so by this point they basically treat it like Christmas; get it over with and try to avoid the racists. DeMonaco’s approach to race and class might best be described as even-handed nihilism, insofar as the poor Hispanic character tries to rape his neighbour and the wealthy white people hunt the less fortunate.

Even when it aims for low-hanging fruit like the religious right and the NRA, The Purge: Anarchy fails in its po-faced execution; the kind that suggests the movie thinks it’s way smarter than it is. Compared to films like Escape from New York or Battle Royale that play up the comedy and characters to match their extreme satire, The Purge is a dirge. There’s no sense of style, suspense or urgency (or anarchy, weirdly), just people running around shooting each other while a big clock counts down to the end of the Purge so we can all see our lives ticking away.

The only difference between this 2014 instalment and 2018’s The First Purge (which is actually the last Purge, naturally) is that there’s a different cast member from Friday Night Lights.