29 years after their Battle of the Bands triumph, the Wyld Stallyns (Alex Winter and Keanu Reeves) have to save their marriages and reality itself by stealing the song that unites the world from their future selves. Plus there’s an annoying killer robot from the future. And Kid Cudi for some reason.

Bill & Ted Face the Music does something hitherto thought impossible: it makes Keanu Reeves look old. To be fair, he is 56. It’s just weird that he’s spent his entire career playing Ted and then when the time comes to actually play Ted again, he does John Wick instead. It’s as if he can’t hold two different characters in his head at the same time. 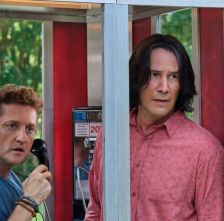 Fortunately Brigette Lundy-Paine (as his daughter) is great at playing Ted, alongside Samara Weaving as Bill’s daughter. Not only is it nice to finally have some female characters in this franchise (Kristen Schaal also plays George Carlin’s daughter), they spend the film doing something that would have made a fitting Bill & Ted sequel in the first place: rounding up musicians from history and forming a supergroup to unite the world.

This storyline rectifies the flawed notion that Bill and Ted are destined to be rock gods and brings the focus back to their message of unity missing from Bogus Journey. The boys themselves ultimately contribute nothing to the plot, as though the movie is acknowledging their obsolescence.

There’s a good film in here somewhere but it’s buried in time travel mumbo jumbo and a heinous lack of jokes. As for Reeves, he’s soon to be reunited with phone boxes in the upcoming Matrix reboot. Is it too late to replace him and Carrie-Anne Moss with Brigette Lundy-Paine and Samara Weaving? Kid Cudi can be the Merovingian.