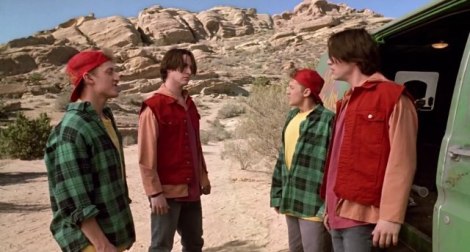 Bogus Journey swaps the original‘s simple charm for something more akin to a bad acid trip, literally taking the Wyld Stallyns to hell and back. There are some striking expressionist hellscapes and inspired sequences (especially Bill and Ted playing Battleships against Death) but without its predecessor’s grounding in reality/history, the movie loses its way – despite (or possibly because of) ambitious allusions ranging from The Terminator to The Seventh Seal.

Where Excellent Adventure had an innocent appeal by virtue of not having a villain, this comes down to a slackers-vs-robots story that can’t help but harsh one’s mellow. It’s natural for sequels of this nature to go darker and raise the stakes (think Back to the Future Part II), but a sparsity of jokes makes Bill and Ted’s quest for cultural supremacy seem most odious – not to mention the flagrant violation of the time travel rules established in the original. 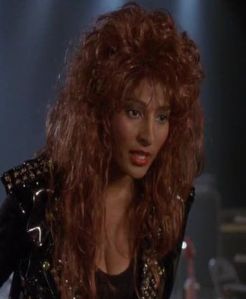 It also feels like a missed opportunity to not involve the protagonists’ princess girlfriends (Annette Azcuy and Sarah Trigger) in the plot (another trait in common with Back to the Future Part II where Elisabeth Shue spends most of the film in a skip), likewise George Carlin’s character who barely gets 30 seconds of screen time. Pam Grier shows up though, along with Primus and (one of) Faith No More – plus Steve Vai provides all the air guitar riffs which is interesting if totally pointless.

But that’s the problem with Bill & Ted’s Bogus Journey – the outsider heroes are overshadowed by insider cameos, because the decidedly uncool underdogs inevitably become cool as prophesied in a very silly ’80s movie. And that’s time travel for you. Sooner or later it leads to a paradox.