I loved Disney’s The Aristocats as a child, though I don’t know if that’s because I loved cats and jazz or if I love cats and jazz because of this film. It’s a real chicken/egg/cat/jazz situation. 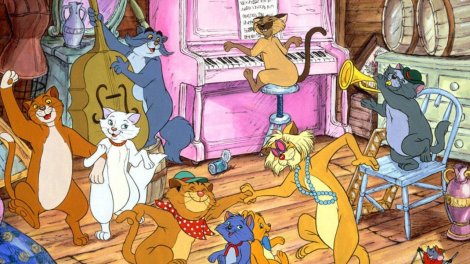 Set in 1910s Paris, 1970’s The Aristocats finds fancy feline Duchess (Eva Gabor) and her three cultured kittens in line to inherit their owner’s fortune. Not having witnessed the failure of Cruella de Vil’s schemes nine years earlier, Edgar the butler (Roddy Maude-Roxby) abandons the cats in the countryside in order to get the money himself. They meet an alley cat called O’Malley (Phil Harris) who shows the aristocats how they swing on the wild side of the tracks.

The story itself is slight, essentially built around a pair of puns (that of the title and “cat” in jazz lexicon) representing the cultural identities of the classically inclined upper classes and the newer jazz generation. The movie makes no judgement on either end, digging the unifying power of music and the freedom that jazz represents. It’s a shame there are only a couple of songs in its brief runtime, including the frisky classic ‘Ev’rybody Wants to be a Cat’.

While the posh pussycats aren’t as fun as the ragtag rug-cutters, the lovingly drawn animation and attention to Parisian detail are delightful to see in an era where this sense of style and culture has all but fled the House of Mouse. Like 1986’s Round Midnight the picture celebrates African-American influence on European culture, recognising jazz as American classical music that straddles social strata with its elegance and swing. The Aristocats has both in spaydes.