The story of a New Yorker (Camille Keaton) who takes revenge on her redneck rapists, I Spit on Your Grave was at the heart of the video nasties scandal. 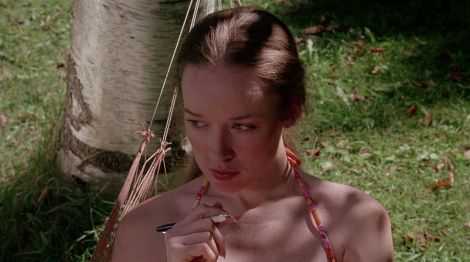 “Who called it Disco Demolition Night and not I Spit on Your Groove?”

Originally released in 1978 as Day of the Woman, Meir Zarchi’s film was largely ignored until it was repackaged and released as I Spit on Your Grave in 1980. Zarchi considered the generic title and iconic poster misleading, not least because the tagline gets the number of men wrong. The titillating image of a woman (a young Demi Moore) is unrepresentative of a film clearly designed to repulse, and then empower – hence Day of the Woman.

What’s interesting about I Spit on Your Grave (admittedly a brilliant title) is that the rape scenes are horrifically realistic and the revenge a proto-Kill Bill fantasy. Keaton’s subtle glee in her vigilante retribution and the blind gullibility of the rapists undermine the film’s reality, turning the nightmarish scenario into a dreamlike catharsis as Jennifer pivots from victim to survivor. 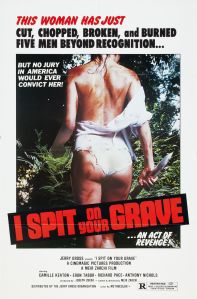 The movie’s impact is diminished by blatantly ripping off Wes Craven’s The Last House on the Left, not just its plot and castrations but entire shots and locations. The innovation is that the woman takes her own revenge, a feminist twist missing from Last House and Straw Dogs. Where it differs from the stylised Faster, Pussycat! Kill Kill! (now that’s a title) is the stripped-down production; taking its cues from Deliverance, the purely diegetic sound lays bare the brutality of Jennifer’s torment.

I Spit on Your Grave is not as good as any of these preceding pictures, marred by iffy camerawork and ADR (Awful Dialogue Replacement) and basically not being very scary. Zarchi would counter that it’s not a horror movie (even though it is), but a lack of suspense is a problem almost regardless of genre. It is however quite disturbing, its confrontational anger a result of an incident where Zarchi helped a woman go to the police to report a rape and found them to be totally ineffectual.

One of the most controversial films of all time, opinion is split on whether I Spit on Your Grave is a repugnant exploitation flick or a powerful feminist piece. Essentially it’s both; a dichotomy that makes the movie punch above its weight culturally, and renders it more interesting historically than cinematically. Gene Siskel and Roger Ebert called it “the worst movie ever made” and stood outside Chicago cinemas telling people not to see it, creating a national hysteria that ultimately backfired when it outsold Fiddler on the Roof and Grease upon its release on home video.

Love it or hate it, I Spit on Your Grave is the epochal rape-revenge movie; a catalyst for superior successors like Martyrs and The Woman, and a film with a lesson – if you want something to go away, your best bet is to ignore it.