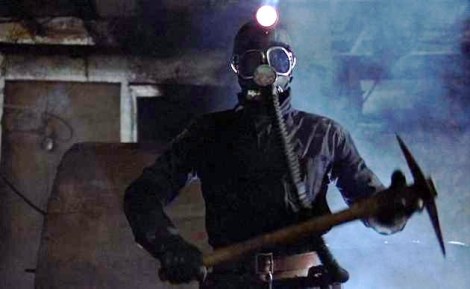 In 1961 a fatal mining disaster is caused by workers abandoning their posts to attend a Valentine’s Day dance, so in vengeance sole survivor Harry Warden kills those responsible and warns the townsfolk never to celebrate Valentine’s again. 20 years later they ignore his vigilante act of local planning and decide to have a party in the mine itself, when human hearts start popping up all over town.

This miner Canadian entry into the ’80s slasher cycle sadly copies Halloween and Friday the 13th‘s anniversary revenge formula, a real pit-y considering Canada actually invented the holiday slasher genre with the earlier masterpiece Black Christmas. Paramount also shafted the production by cutting 9 minutes of violence due to the backlash they had received over Friday the 13th, while director George Mihalka suggests John Lennon’s murder was another contributing factor. Imagine.

He pulls off some excellent kills in spite of these restrictions, particularly the old lady found spinning in a washing machine. The use of miners instead of the usual minors marks a nice departure for the genre, though they still act (in both behaviour and performance) like slasher movie teenagers; surely you would only drink in a scrapyard because you’re underage, not to soak up the ambience. Any individuality is literally left on the surface when the characters finally descend into the mine for an anticlimactic chase through the tunnels, a promising setting mined for little more than shaft humour.

Highly forgettable but more fun than the lucrative Prom Night and Halloween II, the picture’s disappointing commercial performance collapsed any hope for sequels – the 2009 remake notwithstanding. The branding potential alone should have been enough to secure the title’s future, with taglines including, “This Valentine’s Day, romance is dead.” They could also have used, “It’s mine party and I’ll die if I want to.” In the end though the groundbreaking rock band did more for the name My Bloody Valentine than the film ever coald. 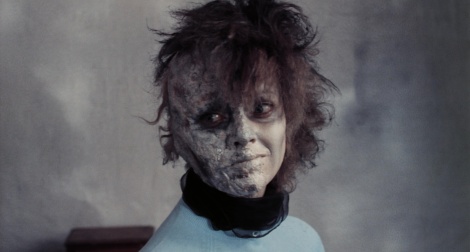 At least My Bloody Valentine has the good sense to be set on its titular holiday. The same cannot be said of Bloody New Year, a movie so bad even its title wants to be a different film. Taking place in summertime, this British effort (and it is an effort) follows a group of friends to Barry Island where they’re set upon by Welsh people. They escape in a boat which capsizes, leaving the gang stranded and soaking wet (a pretty accurate depiction of a British summer holiday) at a deserted hotel stuck on New Year’s Eve 1959. 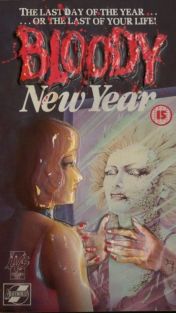 As in My Bloody Valentine the horror is based in past trauma; forgive the mild spoilers but the film’s alternate title Time Warp Terror gives the game away. It transpires that a nonspecific government experiment tore a hole in the fabric of time, trapping the island on that night and sucking people into its time warp – sucking being the operative word.

Intended by director Norman J. Warren as an homage to 1950s B movies, Bloody New Year fails outright – not least because it looks like the 1950s before they even enter the time warp. The film also seems more interested in ripping off its contemporaries than referencing the oldies, stealing liberally and incapably from Demons, A Nightmare on Elm Street, Friday the 13th, The Evil Dead and The Shining.

Unfortunately the hotel is more Fawlty Towers than the Overlook, the haunted house effects striving for “seaside ghost train attraction” and falling tragically short; our poor holidaymakers are chased by vacuum cleaners, fake snow and canned laughter. It’s not surprising that the actors never look remotely scared, nor that the experience made Warren give up directing. Halfway through production.

Bloody New Year is one of those slasher flicks that’s so cheap and amateur that you occasionally wonder if it’s deliberately experimental or just totally incompetent. It proves to be the latter, despite some strikingly bizarre moments – and there is a degree of morbid curiosity in seeing something that does not work on any level. But you eventually feel like the guy in Itchy & Scratchy Land forced to celebrate New Year on a perpetual loop. A bleak financial year ahead for all involved.