Everyone’s favourite crime fighting mutant is back for another solo outing, after 2009’s X-Men Origins: Wolverine. An isolated Wolverine (Hugh Jackman) travels to visit the deathbed of Japan’s most successful businessman, who he saved from the Hiroshima blast in 1945 in a scene almost as absurd as the X-Men‘s concentration camp opening. All is not what it seems, however, when his ailing friend goes after Wolverine’s power to heal.

The Wolverine is as strong as its titular character, and an improvement on Logan’s fun but daft origin tale. The fact it’s not a prequel makes it refreshingly unburdened compared to Origins, X-Men First Class, and indeed recent origin tales from other franchises like Man of Steel and The Amazing Spider-Man.

The best thing about Origins was seeing the barmy army of mutants it brought to the screen use their powers in extraordinary ways. The X-Men universe has always allowed for a lot of incredibly cool fights and stunts, and seeing the rich array of powers play off against each other on-screen can be brilliant if done properly.

The Wolverine doesn’t go down this route, however. There are only two mutants in the film besides Wolverine himself, one of which has only very minimal powers.This means it can’t just fall back on another mutant face-off when things get dull, instead relying on a story and character driven approach.

This isn’t to say there’s any less action here, and there are some truly spectacular sequences. A fight on the top of a bullet train is breathtaking and particularly memorable. Director James Mangold clearly understands action, and that it’s not just a question of having more and bigger explosions, opting for well choreographed fights and impressive parkour instead. Although it does opt for a disappointingly dumb final fight. 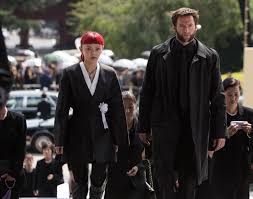 The character of Wolverine has developed too. He’s back to being the lone asshole of  X-Men with the rough edges well and truly back. If being one of Xavier’s team softened him up a bit, in the years since he’s returned to his old self. Huge Jackman is bigger than he’s ever been this time round and deserves praise for his commitment to the role. He knows Wolverine is his, and that isn’t going to change any time soon.

They’ve done away with much of the comic relief, like the scene in Origins when he inadvertently destroys a bathroom with his badly CGIed claws, although the aforementioned Hiroshima scene is the most ridiculous nuclear death aversion since Indiana Jones and the Kingdom of the Crystal Skull.

The Japanese setting is a welcome change, although the list of clichés is quickly exhausted, with scenes centred around chopsticks, samurai swords and ninjas. Also, did you know almost every Japanese person knows martial arts? But hey, at least they got their money’s worth from the plane ticket. Flying to Japan’s not cheap y’know.

The Wolverine shows that there’s still plenty of life in Logan, and that you don’t need the most mutants or the biggest explosions possible to make a great action film. After the tired feel of Iron Man 3 and Man of Steel, The Wolverine at least feels like there’s a story to tell. An improvement on Origins, there’s plenty here to get your claws into.

Is this poster saying I should I watch The Wolverine or buy a Gillette Mach 3?

8 responses to “The Wolverine”