Soon after the events of Days of Future Past  (or before?) a super-mutant is resurrected in Egypt. Among his powers are the ability to manipulate matter, the ability to enhance other mutants’ powers, and the ability to make characters’ hair the same as it was in the original X-Men film.

This is the messiest X-Men film since Origins: Wolverine (AKA the one with will.i.am). Like that film it squeezes in more mutants than a GM crop convention. This is not wholly unwelcome, since audiences were keen to see more of Quicksilver, and we’re introduced to younger versions of the main mutants of the original trilogy, but they have too little screen time each, with further competition from Angel (Ben Hardy) and Psylocke (Olivia Munn) as Apocalypse’s hench-mutants, and a younger Nightcrawler (Kodi Smit-McPhee).

Even so this is the best film yet for Jean Grey (Sophie Turner – who couldn’t look less like Famke Janssen if she tried) and Cyclops (Tye Sheridan), since they were the most horribly two dimensional supporting characters in the original film. Storm on the other hand still has nothing to do, and is given a backstory as an Egyptian urchin girl which doesn’t tally with the character we’ve already seen. In spite of bringing the films almost full circle back to the start, it has little regard for the continuity of the series.

And in possibly the most pathetic creative decision in the franchise, Mystique, who has thus far existed almost exclusively in her blue form or impersonating other characters, here spends the vast majority of the film as Jennifer Lawrence, AKA, the form she hated Xavier for telling her to live in. This is thanks purely to Lawrence’s stratospheric career path since she was originally cast. I guess if you’re going to fork out for Katniss you want to use her actual face as much as possible, but it’s really lame when real life marketing intrudes on a film character in such a big way. I mean, how many people could pick Rebecca Romijn out of a lineup? 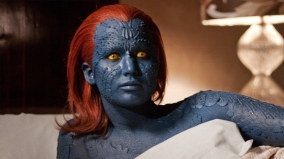 The X Men are at their best when they’re engaged in some serious moral wrangling, usually against humans with anti-mutant prejudice. But in this film it goes for full-on ‘supervillain trying to end the world’ on a level that would make Zack Snyder blush. And this is with a villain who gets boring very quickly – he spends most the film giving repetitive speeches about enslaving the world, which Magneto and others inexplicably go along with. Magneto is driven by his views on human/mutant relations, not by world destruction and domination.

But when Apocalypse is not on screen, it’s largely reruns of stuff we’ve seen before. There’s a scene where captured mutants are taken to Alkali Lake which they then have to escape from, just like in X Men 2 and Origins: Wolverine. And Magneto’s motivation and the interplay between he and Charles is a rehash of First Class, down to the backdrop of world-ending missiles firing. Even Mystique’s side swapping has now been going on for three film and is getting old. Like Adrian Balboa, she adopts whatever viewpoint benefits the plot.

There are some great scenes – including a psychic battle between hero and villain – and the characterisation is still better overall than it was in the original trilogy. But its good ideas are drowned out by the over-the-top finale, crowded screen and iffy logic. With a prequel trilogy complete, and the well of ideas apparently dry, it might be time to put the X Men to rest before these films mutate into a lesser species.