Here’s a film that’s on BBC iPlayer until Monday, so you can watch Right At Your Door right at your computer. Providing you’re in the mood for a pretty unrelenting film about a guy stuck inside his house after a dirty bomb explodes in downtown L.A. where his wife works. Which I always am. 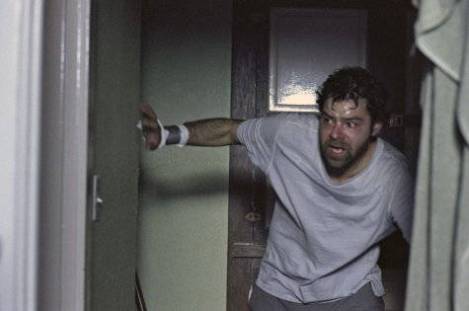 Released in 2006, this is writer/director Chris Gorak’s debut feature, having previously served as art director on films as great as Fight Club and Fear and Loathing in Las Vegas. This features none of those movies’ visual idiosyncrasies, instead shot completely naturalistically. The effect is one of strong realism, making this a grounded post-9/11 survival thriller.

With its siege setting and social resonance, Right At Your Door is really a zombie film without the zombies. The low budget ensures that the film prioritises atmosphere and storytelling over spectacle. All the action is confined to the house which makes the whole thing feel appropriately stifling, and lends it a focus lacked by bigger-budget disaster fare such as Steven Soderbergh’s Contagion. 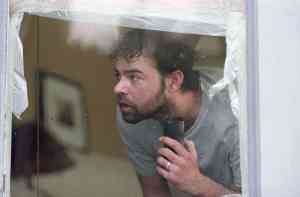 Rory Cochrane is well cast as the everyman, his performance toned down from his stylised turn in the same year’s A Scanner Darkly. Mary McCormack is equally impressive, completely selling the character’s sheer desperation. It’s this feeling of helplessness that makes Right At Your Door such a compelling watch.

Unfortunately, there’s a cute child whose presence, though brief, is so obviously for the purpose of emotional manipulation that he might as well be dressed as a little puppy. This slushiness spills over into much of the dialogue, undermining the realism that is so crucial to this film. It’s by avoiding sentimentality that Threads is so painfully effective – a BBC film (I swear I don’t work for them) from 1984 about a nuclear bomb falling on Sheffield that remains the high-water mark for this kind of speculative disaster fiction.

Watch Right At Your Door on iPlayer here.

One response to “On iPlayer: Right At Your Door”