At a solemn, grey Catholic school in 1960s America, the feared principal Sister Aloysius Beauvier (Meryl Streep) suspects the parish priest, Father Flynn (Philip Seymour Hoffman), of behaving inappropriately towards a student, who he has taken under his wing. With little evidence but much conviction she works to get him removed from the parish, but are her fears real or just a product of her distaste for his modernisation of the school? 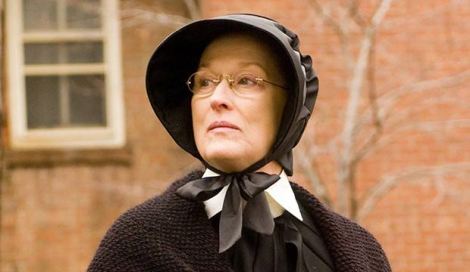 Doubt makes the most of its accomplished cast, with Streep and Hoffman’s interactions anchoring the film. Streep does an excellent job, with her sheer acting, of making the stern and abrupt school principal seem human, while maintaining her frosty exterior. She even manages to play the character comedically in places, giving the film a surprise handful of funny moments, even while not making her seem like a silly caricature.

Whereas many films have an overarching viewpoint, Doubt presents no more evidence for the priest’s wrongdoings to us than the characters have access to and allows us to draw our own conclusions. The child abuse scandals of recent years have shown the huge problem institutions like this have in spotting, reporting and dealing with abuse, and Doubt demonstrates this. It shows the difficulty in gathering evidence, the problems created by the hierarchy in the Catholic Church, but also what it is like to be eyed with suspicion.

It’s a mature look at a serious situation, well executed and directed by John Patrick Shanley.

One response to “Doubt”