Every time I watch Spielberg’s superb debut Duel I’m blown away by the brilliance of its simplicity. The whole film is essentially one long car chase and pure suspense from start to finish.

The driving is reminiscent of the early scenes in Psycho, and the music close to being lifted from Hitchcock’s masterpiece. Duel feels like a film made by a person who is already a master of their craft and allows Spielberg a reasonable claim to greatest master of suspense since Hitchcock; skills he would go on to exploit further in Jaws and Jurassic Park.

One thing that’s so effective about Duel is the anonymity of the truck. Spielberg resists the temptation to give an explanation in a way that may prove unsatisfying for some, but gives the truck a terrifying, cruel and inhuman presence. The fear of the mechanical is summed up in a description of James Cameron’s terminator: “It can’t be bargained with. It can’t be reasoned with. It doesn’t feel pity, or remorse, or fear. ” Terrifying. 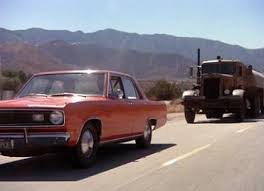 The truck is like a game of keep-away by bullies in a playground. Whenever the victim runs to one of them to get their belonging back it’s thrown away, and they’re powerless to do anything about it. The truck uses its superior speed and weight, and advantageous position as the aggressor, to thwart car driver David’s (Dennis Weaver) attempts to avoid it. While the theme of man versus machine is clear, in the 21st century the film can be read a different way.

The truck in Duel is analogous to an internet troll. The driver uses his anonymity to torment a stranger for no apparent reason. Like an internet troll, David has no idea why this truck pursues him, who is actually responsible or why they have selected him. Whether for some kind of vengeance or a completely random attack, having no idea what lies behind this assault is one of the scariest things. No motive is given, and the fact the truck starts out by inconveniencing David for no real reason, stepping up its attack once he becomes agitated, suggests it is merely for sadistic pleasure. Indeed, even if the driver is someone David knows, he still pursues him with a gratuitously hateful vengeance.

Anonymity allows people to behave how they would were the judgement of their person not a factor, and their actions consequence-free. In the same way executioners wore masks, when people are not accountable for their actions their darkest pleasures are allowed to run free, which is something Duel taps into perfectly. With the debate about the behaviour of anonymous internet uses, Duel remains relevant and can help us better understand the fear of the unknown assailant. And it’s also really exciting.

7 responses to “Duel- An analogy for the internet troll”