Even if you’re not familiar with Elvira, you may know Simpsons parody Booberella. Elvira is the same character by a different name, but you just can’t beat the original. 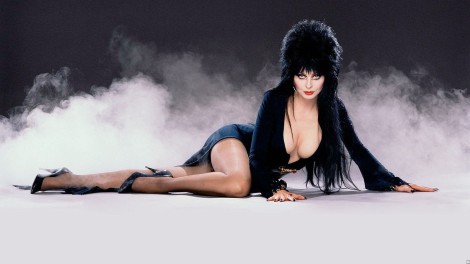 Originally created by actress Cassandra Peterson after she was hired to host late night horror films, Elvira gained popularity in the 1980s. Her success on late night TV spilled over into the mainstream, culminating in her own film in 1988, co-written by Peterson.

In Mistress of the Dark Elvira walks out of her hosting job to pursue her dream of starring in a Vegas show. When her mysterious great aunt dies, she goes to the small town where she lived in search of the inheritance cash she needs. But the people of the small, well-to-do town take a dislike to Elvira, who decides to stay there to discover the truth about her family, and their connections to the supernatural. 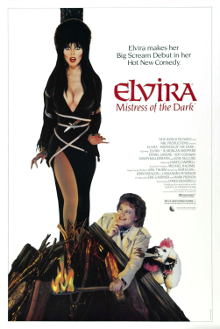 The aspect of the plot that involves Elvira taking on a tight-laced small town is weirdly similar to Footloose, except this is sexier, funnier, and the locals’ minds are changed not with dancing but black magic. But there’s more to it than this, as it evolves into a satirical horror comedy.

This film works because Elvira is an amazing character. She has the razor sharp wit and massive wig of Lilly Savage, but with a pair of gravity-defying gazongas, around which much of the comedy, and probably a few satellites, revolve. Peterson inhabits the role, despite it unfairly winning her a Razzie nomination, and makes this outrageous creation tough, determined and fearless, but also warm and like you could go for a drink with her.

The film is laugh-a-minute, with Elvira’s acerbic one-liners making short work of anyone who crosses her, and double entendres coming thick and fast. This is a film that was probably awful at the time, but with the benefit of hindsight we can appreciate the over-the-top hilarity of it all with a knowing wink.

The horror stuff is also well done and entertaining too. What’s not to love? It’s not even as smutty as it could have been, generally remaining in family friendly Carry On territory. Apart from the fact Elvira’s boobs are extremely visible at all times.

I admit I watched this film because I thought I hadn’t been writing enough bad reviews, but I have been well-and-truly won over. Elvira is a great character, and this is a funny film which is well worth a watch.

Elvira, Mistress of the Dark is available free on YouTube

2 responses to “Elvira, Mistress of the Dark”