After watching a huge number of Kevin Bacon films I have to admit that in spite of all the jibes about that awful advert he’s in, I’m now a Kevin Bacon fan. In none of these films does he give a bad performance and shows his range of skills and abilities from portraying a tight laced soldier in A Few Good Men, showing off his dancing in Footloose and going invisible in Hollow Man.

His career has showed remarkable longevity. The oldest film we’ve reviewed here is 1978’s Animal House, 35 years ago, and Bacon is still popping up in films, even if it may be an exaggeration to call him a household name (the several people I’ve told about this have said “who’s Kevin Bacon?”). He’s made it this far because he’s a talented actor and an engaging screen presence. Who else could accurately be compared to Jamie Lee Curtis, the kid from Close Encounters and Simon Cowell? Talk about acting range! 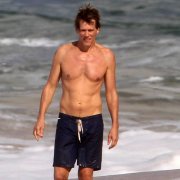 I think I even hate those Kevin Bacon adverts a bit less now I get all the references, so don’t see them as a sleight on my film knowledge. And credit where credit’s due, there aren’t many actors who could do an advert like that where a room full of characters from such a wide variety of films pop up. If, say, Robert De Niro did it, it would just be an assortment of quiet, surly men mumbling at each other. And 6 degrees of Robert De Niro isn’t a thing so it wouldn’t make any sense.

Particular highlights for me have been A Few Good Men and Apollo 13, and even bad films like Footloose are made better by Bacon’s involvement. And he keeps improving, appearing as brilliantly nasty villains in recent films like Super and X-Men: First Class.

What’s next for Bacon? Who knows, but I suspect he’s not ready to retire any time soon. Particularly as he lost most of his life savings in the Bernie Madoff scandal. His 35 year film back catalogue means there’s plenty of mileage for more of those Kevin Bacon adverts, which will please fans of the series, and his ability to turn his hand to anything means he should continue to be a staple on our screens for years to come. He might even act in more films, too.