First Blood follows John Rambo, a Vietnam  veteran searching for one of his old army pals. The people of a small town don’t take kindly to Rambo, however, as the local police arrest and harass him. The thus far docile Rambo decides that enough is enough and uses his special forces training to escape the police cells and flee to the woods, where he wages war on the entire police force.

Rambo appears to be anti-war primarily because the character has been ruined by the conflict in which he served. His friends are dead, and he’s constantly reminded of the trauma he faced. It’s agnostic to the rights or wrongs of the Vietnam war, and is a more personal tale of the affect it has on a simple soldier who believed what he did was right, whether or not the conflict was. 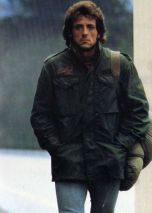 It tells the tale of a man who is shunned and branded an outcast by the very people he believed he was fighting for, and shows the difficulty of dealing with the trauma of war with no support. Rambo resorts to violence only after he is extensively harassed, and doesn’t appear to relish the concept. Violence in First Blood appear to be an evil.

While Rambo is often considered one of the greatest action heroes, First Blood is also a very sensitive look at a character and at the effects of war. It’s violent, and there’s certainly the enjoyment in watching violence that’s typical of action films, but it also doesn’t glorify it and is primarily character driven. Rambo’s emotional breakdown in the final act is particularly poignant, and a rare sign of male vulnerability in the genre.

This is why I always assumed its sequels completely missed the point of the original. The sequels are straight up action films. Rambo goes to a foreign country and shoots non-white people for a couple of hours.

The Rambo of First Blood, with a code of honour and a sense of duty, would be at odds with the gun-for-hire of 2008’s Rambo, where he massacres waves of people, shooting them until the flesh flies off their bones, for ninety minutes with little plot or point. It seems like Stallone completely missed the point of his fantastic original film and butchered the character as his character butchers his enemies.

But maybe he didn’t, maybe I just missed the point of the original. Maybe it’s not against war and violence, only the response of America to Vietnam veterans. It may be a kind of revenge film: the police attack Rambo so he attacks them. Or it may be a warning: treat veterans this way and you might get what’s coming to you. Whatever your interpretation, it’s possible it lacks an anti-war message, and is therefore consistent with subsequent films. 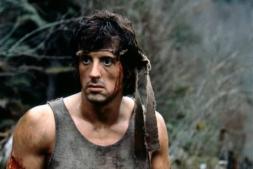 If Rambo is only traumatised through his violent urges being deprived of an outlet then he isn’t the broken soul he appears to be. He may actually just be a person for whom war has become a way of life, in which case it seems perfectly reasonable that he would revert to type when the situation presents itself. The trauma Rambo seems to have experienced in First Blood would seem to be a deterrent for him returning to conflict, as he does in the sequels, but if First Blood wasn’t saying war is generally bad, only America’s response to it, this problem goes away.

If First Blood is purely critical of Americans don’t support their troops, particularly those who served in Vietnam, this makes it less a treatise on the horrors of war and closer to jingoism, given the hard-line consequences for said citizens. Certainly people who unduly harass someone are worthy of criticism, but those who go to foreign countries and kill innocent civilians can’t be exempted from criticism themselves. Just watch Apocalypse Now! to see the other side.

If the only purpose of First Blood is to say “look at this hero who fought for you and how you’re treating him” it seems to be less interesting than if it were to say “look how war has destroyed this man’s life”, in which case this might also extend to the Vietnamese victims of the US invasion.

11 responses to “Is First Blood an anti war film?”