Ahead of September’s new Rambo movie (Rambo Number 5?) let’s look back on this 1985 sequel and ultraviolent Coca-Cola advert. 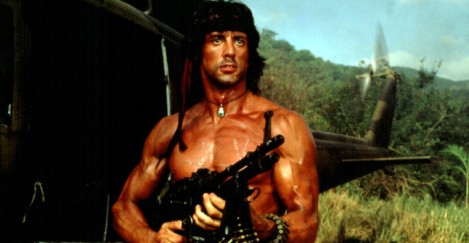 Not so much a film as a catalogue of shots of Sylvester Stallone’s muscles rippling as he shoots a massive machine gun, Rambo II wastes no time in backstory or character and gets stuck right into the action, as “decorated vet” (which sounds like a Hallmark movie character) and violent psychopath John Rambo is sent to Vietnam to “take photographs” of secret PoW camps without killing anyone – a strange task for John “pure fighting machine” Rambo, especially considering they don’t even give him a camera.

Motivated by the desire to win a war that ended a decade ago, Rambo kicks off the action with a weirdly clumsy plane stunt where his parachute gets caught, leaving him stuck in mid-air as though they’d accidentally brought Frank Spencer to Vietnam (who would at least have provided his own beret). The rest of the picture alternates between ridiculous violence and even more obscene product placement, meaning there’s an advert for Coke in every other shot and an advert against it whenever Stallone is on screen.

George P. Cosmatos would direct Sly again the following year in Cobra, swapping Coke for Pepsi but repeating the mistake of letting Stallone handle the script – although a certain James Cameron gets a co-writing credit here. The dialogue sounds like Stallone’s work though, thanks to lines like “I’m expendable,” “You made it Rambo!” and “Everything that happened here may have been wrong but dammit John, you can’t hate your country for it.” His acting is no better, performing in the same gormless monotone for 90 minutes (and 30 years).

Fortunately the action is well executed and exciting, Steven Berkoff shows up and does his Russian baddie schtick from Octopussy, and there’s never long to wait before the next explosion. With this sequel the series doesn’t so much jump the shark as blow it up with a bow and arrow, degenerating from the interesting PTSD angle of the original to just another Vietnamese bloodbath. First Blood saw Rambo exercise improvised, non-lethal self-defence, whereas here he flat-out relishes killing whether it’s required or not.

Overall First Blood II is an odd, highly flawed but fun film, though it should be called Second Blood, and wouldn’t have even been necessary had the Vietcong’s aim been this bad first time round.