After extensive recommendation I finally gave in and paid £4 for this film (about four times my usual budget), and it was worth every penny. When her family is murdered by a corrupt government official (Gary Oldman), Mathilda (Natalie Portman) finds refuge with a local neighbour. Little does she know that this neighbour is a deadly hit man called Leon (Jean Reno), who may be able to help her avenge their deaths. 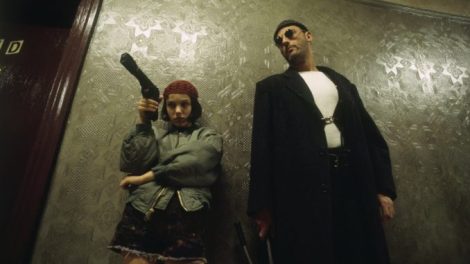 This is one of the greatest revenge thrillers I’ve seen. The core relationship of the film is between the young but hard nosed Mathilda and the initially hostile Leon. It’s one of the great adult/child friendships and shows a mismatched pair coming together against adversity.

Portman is great here, and, weirdly, even though she’s a child she looks exactly the same as she does now. As a character she’s very much like Kick Ass‘s hit girl (right down to the hair cut), but better acted for a more serious film. She’s mature, but also cute and funny, and sweet despite the violence she’s witnessed. Made in 1994, watching Leon reminds us of how incredibly lengthy 32 year old Portman’s career has been, especially considering how mediocre she is as an adult. 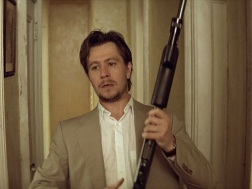 Reno is also great as the hit man, like a less greasy Vincent Cassel, but the real show stealer is, unsurprisingly, Gary Oldman, as the completely unhinged Stansfield, giving us some more great movie shouting. He makes an impact with his minimal screen time giving a tremendous physical performance and once again displaying his ability to become so completely submerged in a role that he’s barely recognizable.

It’s also action packed without feeling like an “action” film thanks to its strong emotional core, and is fast moving and gripping throughout. If it has problems it’s with the implausibility of certain aspects, such as how much Oldman’s government official seems to be able to get away with, but this is easily overlooked.

As thrillers go this is right up there. While not incredibly complex, it’s a fine example of what can be done with a simple story if you have well-written characters and a big emotional core. It’s also a great example of how to make a revenge film. Tarantino take note.