Often cited as one of the best documentaries ever made, 1994’s Crumb is a portrait of underground cartoonist, artist and musician Robert Crumb and his family.

Being something of a philistine, I’d never heard of Robert Crumb, but like all good documentaries Crumb requires no prior knowledge of its subject. Director Terry Zwigoff seems to know the perfect questions to elicit incredibly honest and detailed responses from the eccentric figure. 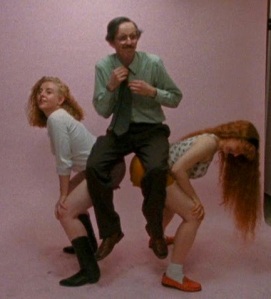 Either that or he’s just a ruthlessly honest man, which seems more likely when one sees his drawings. They’re a bizarre combination of angry satire, graphic sex and warped obsession that seem to pour out of the darkest corners of Crumb’s mind without giving him much of a choice. After a drug-induced artistic awakening, Crumb began to employ a stream-of-consciousness approach to his drawing, resulting in his weird, disturbing and controversial style. It’s great to watch him work – he draws ceaselessly, sitting in public and studying human behaviour like an alien investigating our species.

It’s often said that a good documentary is balanced, and on that front Crumb succeeds by giving a voice to the artist’s detractors who criticise his work from a feminist perspective. He himself admits hostility towards women, laughing “I hate them a little bit less now.” But we’re not invited to like the man, we’re simply invited to understand him.

A common criticism of documentaries is that they barely scratch the surface of their subject, an accusation which can certainly not be levelled against Crumb. Zwigoff uses Crumb’s art as a means of exploring his psyche, which is probably quite easy given the explicit nature of the work. His drawings lay bare his soul and every story from his life is literally illustrated with a cartoon strip. These allow us right inside Crumb’s weird head and provide an extraordinary level of insight.

Not only is this a detailed study of a man, it also raises a number of interesting questions. Is Crumb’s work intellectual art or simply pornography? Is honesty the most important feature of art? Does any of this even matter? Zwigoff manages to raise these issues implicitly, all the time focusing on a deeply personal story. His direction flows seamlessly between Crumb’s artwork, his music and interview footage.

The really strange stuff, however, emerges when we meet Robert’s brothers Charles and Maxon. They make Crumb look positively well-adjusted, providing the film with disturbing images which really creep up on you. The family’s psychosexual issues are discussed with impressive honesty, Charles in particular disarming the audience with his brutal self-awareness. They discuss their childhood with “the old man” – as they chillingly refer to their father – and laugh about incredibly shocking revelations as though they’re amusing family anecdotes.

Crumb is a haunting and insightful documentary, with a real sense of unease throughout – it’s interesting that the film is “presented by David Lynch”, whatever that means. Zwigoff is obviously fascinated by these characters who in turn have their fair share of fascinations, and brilliantly creates this idea of people truly separate from humanity.