In Nazi occupied Poland a group of Jews who have escaped oppression take refuge in the woods. They are led by brothers Tuvia (Daniel Craig) and Zus (Liev Schreiber) who have differing views on how to manage their growing camp.

This is a Schindler-esque tale of an inspirational individual leading a group of people through the most difficult circumstances. It looks at the limits people can be stretched to, and what they can achieve under extraordinary circumstances. 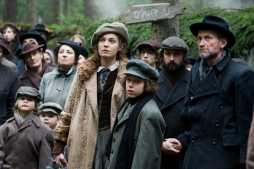 Craig is terrific as Tuvia, and director Edward Zwick gets strong performances from every member of his cast. He examines the moral dilemmas faced by honest people who need to beg, steal and sometimes even kill to survive, and the toll these dreadful circumstances takes on well-meaning individuals.

The film is wonderfully shot, capturing the coldness of life in the forest, with a naturalistic visual style close to that of The Pianist. It’s a story which isn’t just a harrowing representation of Nazi oppression, but also a remarkable tale in its own right, on a par with Spartacus.

In a recent blog post I condemned Quentin Tarantino’s cynical use of the holocaust in Inglourious Basterds as an excuse for a bloody revenge film. Defiance takes a far more nuanced approach to the ethics of the situation, with human characters who would rather avoid killing if they possibly can, and are determined not to be made into animals. It’s is a far more sensitive portrayal of the period which never loses sight of its humanity.