With Gravity still orbiting cinemas, let’s look at another sea sickness-inducing survival movie. Made in 2003 and based on real events, Open Water follows a couple whose scuba diving holiday goes horribly wrong. Not lost-luggage-and-stomach-bug wrong, but stranded-in-the-middle-of-the-shark-infested-ocean wrong. It’s definitely a holiday that warrants a negative review on TripAdvisor, probably 2 or maybe even 1 stars. 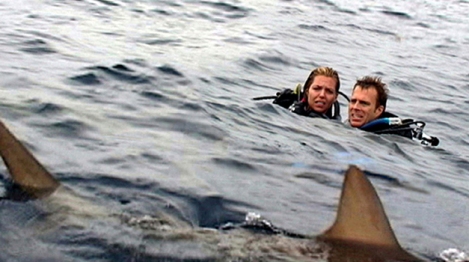 While Gravity had a budget of $100 million and a huge production, Open Water  was made for $130,000 with no crew. Director Chris Kentis and partner Laura Lau shot the whole film themselves with handheld cameras and natural light, giving the whole thing a home-movie realism. Given the low-budget, some of the underwater photography is impressive; there are some great shots looking up at the couple on the surface, giving the impression that there’s something beneath them, waiting.

This sense of dread flows through the movie like saltwater, with a queezy atmosphere brought about by the cinematography and the situation. In true generic style there are moments of false-hope, comic-relief and everything going as wrong as possible. As a result, Open Water is nail-bitingly and leg-gnawingly stressful throughout its short 77 minute running time. This makes it arguably more effective than Gravity, and there’s none of the annoying emotional-manipulation. Just two people, the ocean and some sharks.

It’s another super two-hander, with only two actors in the entire piece; Daniel Travis and Blanchard Ryan. They successfully serve as the movie’s human anchor, and without any stunt team or special effects it’s down to them to do their job in the middle of the actual sea surrounded by actual sharks. Their relationship is stretched to its limits by the elements, as their bickering descends into what can only be described as The Blair Fish Project.

Their backstory lends the plot a cruel sense of irony; her stressful worklife leads them to take this vacation as a well-needed break, which ends up less like a holiday and more like Jaws. This gives her a crucial sense of perspective on life – but is it too late? Open Water is an economical, existential and elemental survival film which makes one hell of a splash.