The Hunger Games: Catching Fire sees Jennifer Lawrence and Josh Hutcherson return as Katniss and Peeta – not animal rights activists, but the victors of the Hunger Games. I’ve written before about my love of speculative sci-fi sports, and this is one of the greatest; a televised jungle bloodsport which resembles I’m A Celebrity Get Me Out Of Here but less awful. 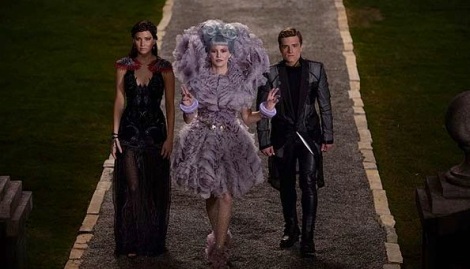 There’s a lot to admire about this sequel, based on the second novel of Suzanne Collins’ trilogy. With its sincerity, intelligence and strong political themes, this franchise is everything teen fiction should be. It treats its audience with a maturity lacking from the likes of Harry Potter or Twilight, never shying away from moments of violence and sadness – and with a genuinely interesting hero in Katniss Everdeen, brilliantly played by Jennifer Lawrence. This is a movie bursting with ideas, perhaps even more so than last year’s original, tackling such contemporary issues as reality television, celebrity culture and political inequality. There’s a bold dystopian bleakness to the piece, the washed-out colours and Jennifer Lawrence reminding us of the wonderful Winter’s Bone and making us wonder if squirrel-skinning is written into her contract.

Where Catching Fire perhaps falls short of the high mark set by its predecessor is in the plot. It twists and turns like a twisty-turny thing, to quote Stephen Fry in Blackadder, making less and less sense with each development. Then there’s the Games themselves, which feel increasingly contrived and video game-like as our heroes fight level after level of CGI threat. Newcomer to the franchise Francis Lawrence directs with skill but apparently can’t solve the problem from the first film of shooting fast action in the dark, leaving the film’s brief combat sequences barely visible. It also feels rather like a placeholder movie which is slightly unsatisfying – a case of middle film syndrome. Except that the final book is being split into two films, as is seemingly required nowadays.

Nevertheless, The Hunger Games: Catching Fire succeeds on the strength of its themes and performances, leaving audiences hungry for the conclusion of the franchise – a franchise committed to showing teenagers the harsh realities of existence; that life is pain, love is unrequited and politicians are pricks.