I love Danny Boyle. He makes consistently great movies, turned down a knighthood and seems like one of the nicest people in the world; so much better than his brother Frankie and sister Susan. Shallow Grave is his debut feature, a 1994 thriller which, like his follow up Trainspotting, is set in Edinburgh, written by John Hodge and stars Ewan McGregor. 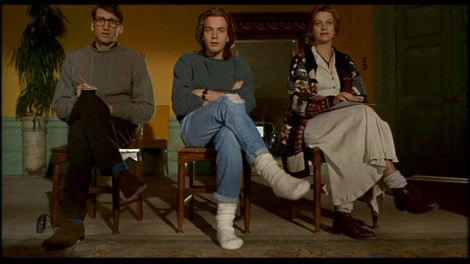 Three friends (Christopher Eccleston, Ewan McGregor, Kerry Fox) share a flat and take in a new housemate. But when they find him dead with a suitcase full of cash, it pulls their friendship apart. Once you get past the idea of Obi Wan Kenobi sharing a flat with The Doctor, this is a strong three-hander and a great little thriller with an ingenious plot, no pun intended. It pains me to say it but even Ewan McGregor does a good job, but then he is both a) being Scotch and b) being directed by Danny Boyle, who could get a decent performance out of a steel girder if he had to. 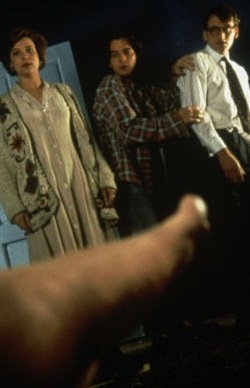 Early signs of Boyle’s brilliance are in place, his combination of pop music and creative visuals rivalling that of Quentin Tarantino. His nightmarish sequences lend a dreamlike quality to the kitchen sink drama, clearly an influence on Ben Wheatley, punctuating British realism with bursts of graphic violence. Shallow Grave is another journey into the seedy underbelly of Edinburgh, but unlike Trainspotting‘s heroin addicts, these are supposedly respectable members of society; a doctor, an accountant and a journalist, and another great example of a journalist in film. It shares this satirical edge with this year’s Filth, one of many movies in which Ewan McGregor has been (un)officially replaced by James McAvoy, thank god.

What Shallow Grave lacks in budget it more than makes up for in creative camerawork and inventive editing, which lend the film its uncomfortable, off-kilter tone. There’s a clear horror influence at play here, and at one point a character watches The Wicker Man, invoking mystical Scottish terror and a sinister conspiracy, reminding me of Ben Wheatley once more. There’s that same black sense of humour, accompanied by a care for the characters and an emotional weight behind the violence. Shallow Grave is everything I love about Danny Boyle films; it’s bold, gripping and unpretentious, and makes one hell of a debut. I dug it, you could say. Plus you see Keith Allen’s penis, which is ironically now most famous for spawning Lily Allen.