As usual, here’s one of Woody Allen‘s best films and one of his worst films. Don’t you even know that yet? I do.

Allen’s versatility as a filmmaker continues to impress with this sci-fi comedy, about a jazz clarinetist named Miles (Allen) who is cryogenically frozen in 1973 and revived 200 years later, where he’s enlisted by an underground movement to overthrow the tyrannical government.

Sleeper is an inventively silly comedy which feels like Woody Allen does Futurama, packed with jokes about the future, the present and all the time in between. In typically creative form, Allen and co-writer Marshall Brickman tackle issues of class and sex – both at once in the case of the Orgasmatron, the booth which simulates sex in a matter of seconds and serves as the imaginative conclusion of upper-class decadence. There’s the wonderful idea that everything in the future is completely impractical, based solely on design right down to totally unsittable but disconcertingly familiar chairs.

As well as the consistently witty dialogue we’ve come to expect from Woody Allen, Sleeper contains a huge amount of slapstick, demonstrating Allen’s considerable ability as a physical comedian and his love of silent cinema and Buster Keaton. Diane Keaton (no relation) matches Allen’s comic ability and the two share chemistry which characterises many of his movies.

This is another very different but very memorable Woody Allen film, which not only sends up sci-fi but also succeeds as a piece of sci-fi, looking at our own society and issues of identity as he so often does. Like Zelig, this is a strange but personal exploration of a man struggling to find his place in a confusing world. Just like his character, Allen really does play the clarinet, and provides the upbeat jazz soundtrack for Sleeper. And talking of being in a 200 year-long coma… 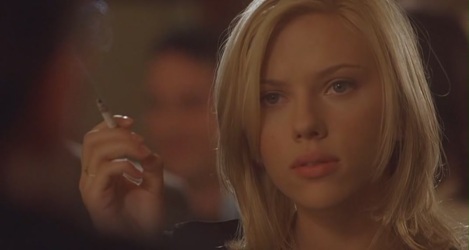 A late entry on my list of things I never want to see in a Woody Allen film is Scarlett Johansson, who pouts her way through this embarrassing melodrama like a narcissistic fish. Chris (Jonathan Rhys Meyers) is a struggling tennis instructor who begins dating the wealthy Chloe (Emily Mortimer) but falls for her brother’s fiancée Nola (Scarlett Johansson).

Not only is Match Point the worst Woody Allen film I’ve seen, it’s probably one of the ten worst films I’ve ever seen. In fact it’s probably the ten worst films I’ve ever seen. Nothing about it works, from the vacant performances to the inept dialogue. Like Cassandra’s Dream, this is set in London, but while that was about cockneys, this is about poshos – the two types of British people according to Woody Allen, who can’t write either. Nothing any of the characters say rings remotely true, as they walk around like overprivileged dysfunctional robots. It’s stagey, stilted and stupid.

Jonathan Rhys Meyers and Scarlett Johansson are such blank performers that their romantic scenes are about as passionate as a cabinet meeting. They ooze vanity and smugness through every perfect pore, coming across as the most hateful couple since Fred and Rose West. I’ve complained about Allen’s fixation upon attractive actresses and this time it’s Scarlett Johansson, a woman who apparently doesn’t know the difference between acting and posing.

Allen thinks he’s making an opera – every other scene is set at the opera and operatic music blares throughout. But this is more soap than opera, the wooden acting and ridiculous melodrama making every moment one of exquisite pain. He also clearly loves tennis – it features in several of his movies and forms a central part of the plot here. But this is a swing and a miss, a double fault, a Tim Henman.

The only good bit is when Mark Gatiss loses a game of table tennis to Scarlett Johansson. And then Steve Pemberton shows up, as does Rupert Penry-Jones. And considering Phil Davis is in Cassandra’s Dream, that means everyone off Whitechapel and half of The League of Gentlemen have worked with Woody Allen. But unless you’re as easily amused as I am, then to quote The League of Gentlemen, there’s nothing for you here.