This 1954 film is an animated adaptation of George Orwell’s classic novel about a group of animals who rise up against their human slave drivers. After they overthrow the tyrannical Farmer Jones, there ensues a power struggle between pigs Napoleon and Snowball, in a story that closely mirrors communist Russia.

The tone of this film must have been a hard thing to get right. On the one hand it’s a cartoon about talking animals, but on the other it’s a brutal tale of oppression and deprivation. Talking animals is a concept that works better on the page than on the screen, and something the makers of serious films often try and avoid. Lengthy scenes of talking wolves, eagles and spiders, for example, were cut in The Hobbit‘s big screen adaptation.

In Animal Farm the problem is addressed by having the bare minimum of dialogue, with events being explained by voice over. This feels like a bit of a cop-out as it fails to imbue the animals with the characters of their literary counterparts, making their betrayal feel less personal. It also makes this film feel more like an illustrated book than a film. I feel it would have been more effective if they’d gone for full-on talking animals, and have events explain themselves. 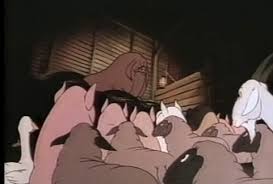 The tone achieved is, for the most part, suitably bleak, however, capturing the dreary greyness necessary to show the brutality of life for an animal on a cold British farm. Hand drawn animation continues to simultaneously hold a mystical beauty and a grainy, organic feel which lends itself well to the story.

Where the book is betrayed completely by the film is in its conclusion, which is altered only slightly (possibly due to CIA involvement), but enough to ruin Orwell’s original ending. The film, with its brief 80 minute running time, also skirts over many characters and details which result in this being less obviously allegorical to real world events. Although given this was the first British feature length entertainment cartoon, perhaps some of these shortcomings can be forgiven. What is kept is, most importantly, skepticism of authority and the idea that power corrupts.

The book of animal farm is so short that you may as well just read it, and enjoy the benefit of the additional detail. This film provides a suitable atmosphere, but is too sketchy in other areas, failing to successfully change a great book into a great moovie.