When Duncan Jones, the offspring of David Bowie, made a low budget sci-fi film, it was met with some surprise. Less shocking is Brandon Cronenberg’s foray into the genre, as he tries his hand at the body horror his father pioneered in Antiviral. 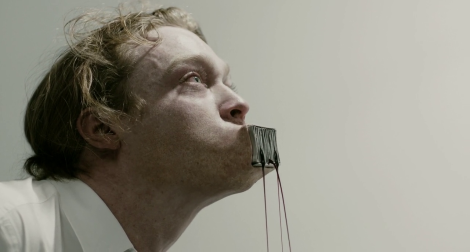 One would expect a weird film from a man brought up by and sharing half his genes with the man responsible for Crash, but perhaps not this weird. Antiviral is set in a future where the cult of celebrity has gone so far that people pay to be infected with celebrity diseases. To be fair, I think I’d rather get brain tumour from One Direction than go to one of their concerts, so it’s not that far off. 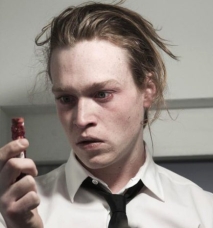 The main character, Syd (Caleb Landry Jones), works for a company which deals in this macabre trade, and gets wrapped up deep in the darker side of the industry when he tries his hand at virusy piracy, selling the infections on the black market.

While this premise may sound absurd, it’s not a million miles away from the culture we already have, a sign of good sci-fi. In the documentary Trekkies a hard core Trek fan pays money for the glass used by John DeLancie, the actor who plays Q in The Next Generation. The actor had the flu at the time, and the fan drank the remaining water in the glass to get the “Q virus”, a reference to the show.

As a society we are obsessed with the minute details of celebrity lives. Jade Goody, once diagnosed with cancer, documented every stage of her demise for her fans, hungry for every detail no matter how morbid. When Michael Jackson died, Sky news gave away tickets to two ecstatic fans. Tickets to his memorial service. 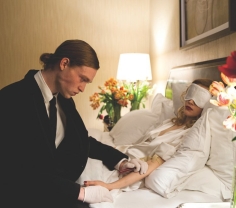 This grim curiosity about celebrity lives is ripe for a satirical sci-fi spin, and Antiviral does a very good job. Yet strangely it never gives much of an impression of a buzz around the celebrities. The main fictional celebrity, Hannah Geist (Sarah Gadon) is emblazoned on billboards, but as all the characters behave in a very stilted and clinical science fiction way, it rarely feel like the devoted fandom of our world.

This cold, monotonous approach to dialogue and characterization contributes to the general sense of unease in the society as a whole, but with people more like servile zombies than human beings it’s hard to connect to the characters. It’s similar in this sense to THX-1138, Equilibrium or Primer. In alien sci fi worlds it’s a great challenge to create relatable characters; one that Antiviral fails.

Where it’s strong its involving plot which plays by the rules of the world in which it’s set. This isn’t just an assortment of ideas for the audience to try and interpret, it’s a fully realised world with an interesting story to tell.  So while it isn’t as good as Moon, it shows enough originality and directorial ingenuity to mark Brandon Cronenberg out as one to watch.

One response to “Antiviral”