Turner prize winning director Steve McQueen’s third picture deals with the harsh realities of slavery through the true story of Solomon Northup (Chiwetel Ejiofor) who is betrayed and sold into slavery in 1840s America.

As with McQueen’s previous films, Shame and Hunger, he prefers to rely on brutally realistic depictions of shocking human tales to intricate plots or detailed character studies. The all-star cast are very good, with Michael Fassbender managing to give the best performance of the film. Ejiofor is brilliant as Solomon, but more of this film’s visceral power comes from showing the full, graphic detail of slavery than from Solomon’s journey. This isn’t to say his story isn’t compelling, but it’s the conditions he both sees and is a part of that are the focus. 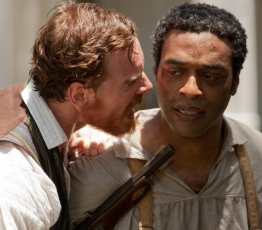 Absolutely nothing is shied away from as McQueen has scene after scene of hanging, whipping and beating. Scarcely ten minutes goes by without a wince-inducing display of depravity. Where last year’s Django Unchained was incredibly violent, it was done in a very cinematic way and was a part of a blood-soaked revenge film. But 12 Years A Slave, as a far more gritty and realistic drama, is more often in hard-to-watch territory, and never feels like it’s using real life horror to legitimize a desire to see violence. McQueen makes sure to show how common the violence against slaves was, with several protracted torture scenes taking place against a background of slaves going about their business.

His aim here is simple: to present the horror of American slavery in a way never seen on film before, and in this he succeeds. He also once again shows himself to be a director who can punch above his weight in terms of making a relatively small budget (a fifth of Django‘s) go a long way. Shot in just seven weeks with two cameras, 12 Years looks on a par with many pricier films.

But in spite of the undeniable quality of this film, it doesn’t feel like the usual Oscar bait. The honesty with which McQueen engages with his subject matter is daring, bold, and challenging to the audience. It’s an important film that will take you out of your comfort zone, and that can only be a good thing.