A boat full of people go deep into the Amazon, with nothing but basic supplies of hair conditioner, in search of wildlife footage. On their way they’re joined by a crazy snake hunter (Jon Voight) intent on capturing a legendary creature.

You’ve seen shark attacks, bird attacks, piranha attacks and even jellyfish attacks, but this time it’s the turn of a giant snake to go to town on an unsuspecting group of stock victims. Amongs them are Owen Wilson, back in the day when his haircut was appropriate for his age, and Jennifer Lopez, both of whom fall into the “bad value” category of actor, providing an expensive big name but little acting talent. 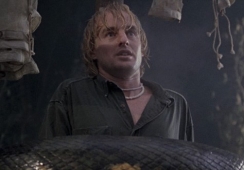 Voight plays the snake hunter of non specific nationality, adopting an accent which aims for Eastern European but comes out like your dad’s Don Corleone impression. There’s also Jonathan Hyde who plays a character almost identical in voice, appearance and occupation to Nigel Thornberry. This is basically a live action Wild Thornberries, but instead of talking to animals they’re crushed to death by them.

This film fluctuates between boring and hilarious depending on whether or not the anaconda is on screen. When Spielberg had trouble making the shark work in Jaws he learnt that less is more, but in Anaconda that they were clearly so chuffed with shiny new CGI technology – reportedly costing $100,000 per second – that they wanted to give the anaconda plenty of screen time.

If they’d set the attack scenes at night, with the snake an unseen foe, it would have been more effective as a scary film. As it is, the only entertainment is from watching the CGI monstrosity writhe around comically. The anaconda even has a credited voice artist, which explains why rather than hissing, y’know, like a snake, it screams like a pterodactyl.

For some guilty enjoyment, this silly slitherer delivers, and who doesn’t want to see Owen Wilson killed by a giant snake?