JCVD is in safe territory in Kickboxer as he plays Kurt, the younger brother of US kickboxing champion Eric (Dennis Alexio). When Eric is challenged to a fight in Thailaid he bites off more than he can chew, and is hammered into paralysis by the Thai champ. It’s up to Kurt to seek revenge, going into the forest to be trained by an Asian stereotype (Dennis Chan). 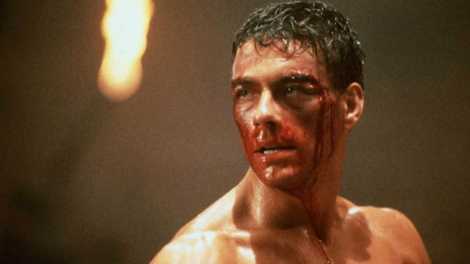 Van Damme co-wrote the story for this film, and as such it makes brilliant use of his trademark kicks and splits. I was, in fact, inspired to watch the film by the recent Volvo ad featuring the Muscles from Brussels. Stay tuned for my review of the truck next week.

If The Wrestler was the Raging Bull of wrestling then Kickboxer is the Rocky IV of kickboxing. Sorry, that was the Muppet Christmas Carol of bad analogies. What I mean is, Kickboxer has a plot pretty close to a Rocky movie, but not one of the good ones. Like Rocky IV it has an American champ take on a physically superior foreign opponent only to be brutally defeated to a career-ending extent. It’s then up to Rocky/Kurt to take revenge by training in the foreign land and taking on the opponent in an attempt to win over the locals. Except instead of the imposing, cold Russian landscape we’re treated to the pleasant Thai scenery.

Van Damme makes the film tolerable due to the sheer skill in his legs, but I wish we got tosee more of his brother’s martial arts. Dennis Alexio, is, I understand, considered one of the greatest kickboxers ever. Unfortunately he’s far from one of the greatest actors ever, completely failing to create an onscreen presence or deliver his lines convincingly.

Considering he has one short fight and then spends the rest of the film paralysed, it may have been a better idea to cast, y’know, an actor. He also doesn’t have the same accent as Van Damme. This is explained away in a clumsy bit of dialogue where it’s established Kurt grew up “with mom in Europe”. I suppose that’s plausible, but when combined with the fact he looks nothing like Van Damme there’s a sense he was the wrong choice, and perhaps JCVD was just doing a favour for an old pal.

This silly kick boxing caper is adequate entertainment for anyone who likes the idea of seeing Jean-Claude Van Damme kick a tree down. So everyone.