Not to be confused with Gareth Edwards’ Monsters or Disney Pixar’s Monsters Inc, this is Patty Jenkins’ Monster; the real life story of prostitute-turned-serial killer Aileen Wuornos, played by Charlize Theron. 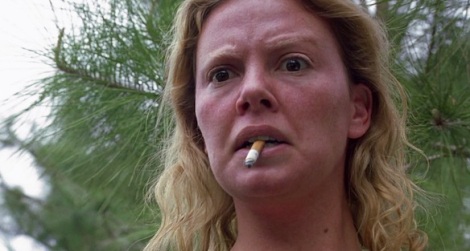 Theron is unrecognisable in the lead role, eschewing vanity in favour of startling resemblance to the real Florida serial killer, who killed seven men in 1989 and 1990 before her execution in 2002. You wouldn’t catch Scarlett Johansson undergoing such a makeover, or conveying any emotion at all for that matter. Crucially, Theron’s transformation is more than just superficial, and she has the range and commitment to completely embody America’s so-called first female serial killer.

She is ably supported by the rest of the cast, notably Bruce Dern as Wuornos’ “only friend” Thomas, and Christina Ricci as her girlfriend Selby. This relationship is particularly well played, and the palpable affection between the two deeply damaged individuals gives the film its emotional anchor and welcome moments of warmth. Ultimately though, the supporting players fade into the background compared with Theron’s Oscar-winning performance, which ensures that the film toes the sensitive line between humanising Wuornos without apologising for her actions. Made in 2003, just one year on from her execution, Monster avoids the charge of sensationalism or exploitation, and achieves the difficult task of remaining tasteful throughout.

If anything, the rest of the film fails to match up to Theron’s powerful leading turn. The predictability of the true story means that the film doesn’t pack the punch it promises, while the sporadic bursts of narration feel unnecessary and misplaced. And then there’s the music; if there’s one thing worse than a soundtrack telling you what to feel, it’s a soft rock soundtrack telling you what to feel. But with a producer credit to her name, this is Charlize Theron’s moment, and even when the rest of the film is ordinary, she is anything but.