One of the many things Saddam Hussein was known for was his use of body doubles, some of whom he reportedly made have plastic surgery to more closely resemble him. But The Devil’s Double focuses on Hussein’s oldest son, Uday (Dominic Cooper), and his body double Latif Yahia (also Cooper). 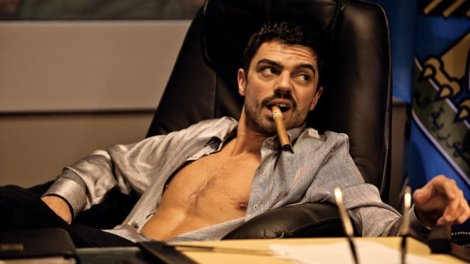 Yahia’s memoirs, on which this film is based, are of disputed validity, but whether true or not, the resultant film provides a chilling portrayal of life at the top of a brutal regime. Uday Hussein is a volatile, narcissistic and violent character, who in any other time or place would have ended up behind bars very rapidly. Even for the son of a dictator he is exceptionally vain and ruthless, and the impossible situation of his double creates a story of trapped terror to rival The Last King of Scotland. Complicity with a violent regime is a fascinating concept, and one that’s hard to fully comprehend for those who have never had to experience it.

Cooper is astounding in the lead roles. He creates two completely distinct characters who one could believe were played by different actors. As Uday he feels like a sleazy kebab shop owner mixed with a violent psychopath, and as his double he is restrained and understated in his dignified terror. His performances are seamlessly blended to convince completely, and the film is made to work by the strength of his ability.

But it’s more than just a great performance, as the full horror and excess of the regime is shown in wince-inducing scenes, and it’s tightly scripted into a well drawn thriller. Films about the doubles of political leaders are a strange sub genre, from The Great Dictator to The Dictator and Dave. This is the first I’ve seen that hasn’t gone down the comedy route, and what results is a dark drama that shows the Hussein regime from an angle we seldom see: the inside.