The man in a vehicle sub-genre has recently given us Robert Redford on a boat and Liam Neeson on a plane, and now Tom Hardy in a car.

Locke is set entirely in a car (a BMW, for all you product placement fans) and features only one character on screen; a construction supervisor named Ivan Locke (a heavily bearded and heavily Welsh Tom Hardy). Locke drives and makes a string of (handsfree) phone calls, most of which are about cement. It doesn’t sound like much, but five minutes in and you’re completely hooked.

As in the case of All Is Lost, the simple, solitary premise offers rich existential substance. But while the Redford film did so without dialogue, this is all about words, with a beautiful screenplay by the film’s director Steven Knight, who wrote Dirty Pretty Things and Eastern Promises, and also co-created Who Wants to Be a Millionaire.

Locke speaks calmly, poetically and philosophically, his name taking on a significance that I’d understand had I actually listened in philosophy lectures. But the recurring use of metaphor around cement and foundations are hard to miss, in fact sometimes a little too hard to miss. That’s the problem with subtext; lay it on too thin and people will miss it, but too thick and it seems heavy-handed. A bit like cement.

Knight manages to strike this difficult balance, with references to Beckett (Waiting for Godot, not Quantum Leap) and the cinematic language of the road movie adding to the film’s sense of significance. Locke’s liminal journey feels important, as though he’s headed for the end of the earth, via Luton. While exploring these big ideas, Knight also looks closer to home, holding a rear-view mirror to modern Britain, human relationships and middle-class comfort.

His direction is as mesmerising as his writing, alongside Haris Zambarloukos’ hypnotic cinematography. Dappled headlamps and soft streetlights shine through transparent shots of Tom Hardy driving, echoing the screenplay’s combination of the physical and metaphysical.

As for Hardy himself (The Dark Knight Rises, not Tess of the d’Urbervilles), it’s hard to believe that this is the same man who played Bane. The super-strong Batman villain is a world away from the compassionate everyman we can’t help but root for here. But then that’s acting, I suppose. 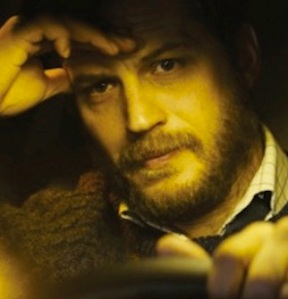 We only see his face, but his emotions are intense and his vocal performance spellbinding. Locke remains cucumber cool while falling apart inside, joining a rich cinematic history of famous drivers, including Robert De Niro in Taxi Driver, Ryan Gosling in Drive and Viggo Mortensen in Eastern Promises (by a certain Steven Knight). The rest of the cast exist only as voices, yet Andrew Scott and the brilliant Olivia Colman stand out, as she always does. It would be nice if someone could put her actual face in a film next time.

Despite occasionally feeling hackneyed (it could do without all the football analogies and daddy issues), Locke stands out as a gripping, philosophical and original drama, elevated by Knight’s screenplay and grounded by Hardy’s performance. You instantly feel as though you’re in the passenger seat, next to a man profoundly trying to do the right thing while his life collapses like buildings around him. Not bad for a film where a man in a car just makes phone calls about cement.