If Grudge Match has taught us anything, other than what it would look like if the undead did competitive sports, it’s that the combination of Sylvester Stallone and Robert De Niro doesn’t work. They co-star in Cop Land, a crime-drama set in a 1980s New Jersey community populated by corrupt cops. 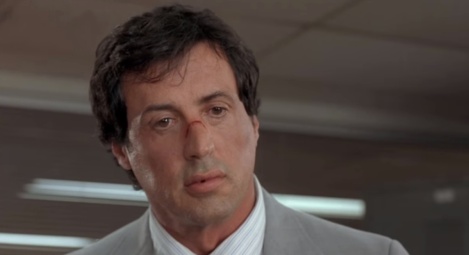 Sly and the Family Stoned.

Everyone’s in this movie, from Ray Liotta to Janeane Garofalo. It’s like The Expendables without the action. But neither is there much of a plot. The only thing more confusing than the premise is Stallone’s performance. 1997 was part of that low point in his career known as “most of his career”. He was great when he started and obviously he’s great now, but here he appears to be in a completely different film to the rest of the cast. In fact, he hardly appears to be in a film at all. Rather than doing any acting, he just sits there looking like a wounded sea lion. Meanwhile, Harvey Keitel resembles a deflated William Shatner and Robert De Niro goes method by growing an insane 1980s moustache.

Writer/director James Mangold introduces a bunch of different plot threads and drops them all like a bad juggler. Speaking of which, Cop Land is a clear reference point for Hot Fuzz. At first, the film looks like it might be about the tensions between the NYPD and the black community. But this is swiftly abandoned and we’re left with too many characters all acting without any consistency. When Stallone decides he wants to help De Niro, why does he suddenly reject his help with his moustache? When Phoebe’s cop boyfriend from Friends rocks up at Stallone’s home, why doesn’t Sly so much as blink? And most importantly, what the hell is going on? The film seeks to expose police corruption, but all it exposes is its plot’s shortcomings. It’s like Martin Scorlazy. It’s Cop Bland.

This film looks so good on paper. It’s got a great cast, a Howard Shore score, and it’s called Cop Land. But Mangold’s execution and Stallone’s un-performance are so perplexing that this ends up a case of good cop, bad film.