Ethan Hunt is back, in Mission: Impossible – Rogue Nation. Your mission, should you choose to accept it, is to try to work out what the hell is going on. 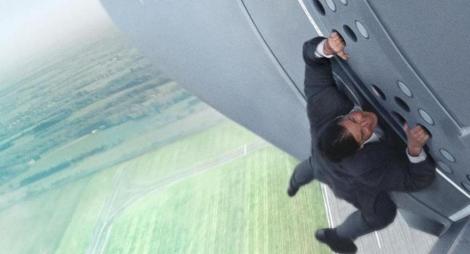 The film opens with a typically elaborate stunt that has literally nothing to do with the plot, which in turn has literally nothing to do with reality. CIA chief Alec Baldwin, in his trademark role of “suit”, shuts down Tom Cruise’s Impossible Mission Force, confusingly abbreviated to IMF. Cruise and the gang have no choice but to go rogue, as they attempt to thwart a secret crime organisation called the Syndicate. Though it might as well be called Bumforce for all the difference it makes to the story or our lives.

But we’re not here for the plot, which is just as well, because it makes about as much sense as a Tom Cruise interview. No, we’re here for the stunts, and we’re not disappointed. Cruise does most of them for real, even at 53. He’s essentially a glorified stuntman in these movies, built like the Hulk and exactly the same age. Cruise is almost entirely to blame for Hunt’s total lack of personality, unless always being a split-second away from jumping out of a window can be considered a character trait. He’s joined by Ving Rhames, Jeremy Renner and Simon Pegg as the “comic relief”, in that he’s about as funny as Red Nose Day.

Then there’s the always evil Simon McBurney being evil, Sean Harris with a bad-guy haircut and Rebecca Ferguson as the obligatory woman lady. There are ridiculous gadgets, outlandish chases and a plot-point involving the Prime Minister, because Americans mistakenly think we give a shit about him. In the end, there’s too much plot and not enough of the action we came to see, and it never reaches the giddy heights of Ghost Protocol. It’s good family fun, with its old-school Bond setup and iconic theme tune. But will we remember any of it tomorrow? It’s not impossible. Just highly improbable.