Everyone’s favourite ass-kicking Scientologist is back as Ethan Hunt, the super-spy who spends two and a half hours falling out of cars, windows and helicopters. This is Mission: Impossible – Fallout.

The latest installment in this apparently invincible franchise follows on from the events of Rogue Nation. Unfortunately I have no idea what they were as I’m unable to remember anything other than a couple of the big action set pieces from the previous five films.  Part of the reason for this is that the Mission: Impossible films have never been great innovators, with much of their content (locations, gadgets, characters) feeling very ordinary.

Here Hunt and his colleagues from the IMF (Ving Rhames, Simon Pegg, Henry Cavill) are still pariahs in the intelligence community, cut off from the US government, wishing they hadn’t let their Lagarde down. Acting with nothing but their wits and an  inexhaustible supply of gadgets and cars, they have to track down some plutonium before it’s used to make not one but three nuclear bombs. 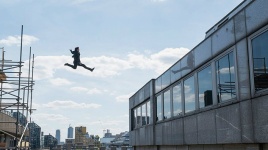 Generic as they may be in content, the reason these films have done and continue to do so well is because they’re always brilliantly executed. Fallout packs in a remarkable amount of story considering the pauses in action are few and far between, although this does result in it being unnecessarily long. But the quality of the writing is undeniable, and far superior to the likes of your average Liam Neeson beat-em-up.

While Cruise may have struggled to find success on other projects in recent years, he’s undeniably on top form as Hunt, whose main defining characteristic is immunity to road accidents, preferring parkour to personality. Henry Cavill also joins the cast, sporting the infamous facial hair that would be eerily CGId from Justice League re-shoots. But the fact it ruined Justice League ends up being the best thing about his performance.

The film features better London-based action scenes than 2016’s London Has Fallen, taking Cruise to the top of the Tate Modern, and having him run across the roof of Blackfriars Station. That’s one way to get round the congestion charge.

And just as it has for punctuation, Mission: Impossible – Fallout pushes the boundaries in its action sequences. They always feel thought out from beginning to end, and consistently surpass your expectations. Just when you think a climax has been reached, something else happens to push Hunt, the vehicle he’s using and general plausibility to their very limits.

The result is a non-stop action spectacle with dizzying, dazzling sequences that continue to be the best in the genre, even if they’re ultimately in service of something disposable.