This is the definitive adaptation of the Mary Shelley novel – the one you’ve seen clips of, and the one a million later Frankenstein’s monsters have been modelled on. 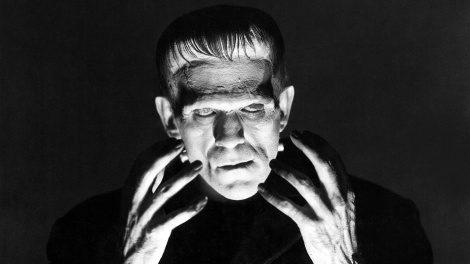 Created just nine years after Nosferatu defined horror cinema and four years after the talkies made their debut in The Jazz Singer, Frankenstein is still remarkably compelling, and vastly superior to its Hammer remake some 25 years later. While it certainly benefits from superb makeup, brilliantly designed sets and ingenious effects, the biggest reason for its success and enduring appeal is the strength of its two main performances.

Colin Clive, as Frankenstein, flits between sane and crazy so we’re never quite sure how stable he is. Perculiarly, he almost seems to become less insane as the film progresses. In its opening scenes he’s seen robbing graves with his hunchback assistant (Dwight Frye), culminating in the famous cry of ‘It’s alive’ as lightning strikes his creation. Following this he returns to normal and starts planning his wedding, even as the creature turns to murder.

Boris Karloff anchors the film in a sense of humanity with his portrayal of the monster. With no dialogue he creates a sense of sympathy through the anguish in his eyes, even as he towers menacingly over those around him.

More so than other adaptations, this shows the monster as initially good natured before it turns to a destructive path. But it still misses the point of the book as I read it. In Shelley’s novel the monster turns to killing not because it’s created evil, or because it’s an abomination against nature. It does so because it’s shunned and rejected by society, primarily because of its hideous appearance. This reads like an allegory for not judging a book by its cover.

I suspect the main reason for the consistency of this interpretation of the monster on the big screen is that a film about a monster attacking people (maybe even you…) sells well. A film about a good creature who is menaced by those around it can’t be sensationalised in the same way. Indeed, the trailer for this film even seems at odds with the level of sensitivity afforded to the character onscreen.

While Karloff’s monster does have tender moments, such as his interaction with a child, in an effort to explain his behaviour the plot is amended so he is accidentally given the brain of a dead criminal, which a scientist has explained is formed in such a way as to make it inclined to commit crimes. Not only does this fatalistically pre-doom our monster to his murderous rampage, it also suggests that this is not a warning about science going too far, but about not making mistakes. If the right brain was used things may have turned out differently.

In any case, the quality of the film shines through, and it remains a fascinating and thrilling adaptation that deserves to be watched even today.