Is there a series with more ironic subtitles than Friday the 13th? The Final Chapter was only the fourth instalment, followed by A New Beginning which it wasn’t, because the next film ignored it. Like the new Star Wars movie. Presumably.

The 6th Friday the 13th movie in as many years, Jason Lives forgets about the copycat-killer idea introduced in its predecessor and goes back to Jason Voorhees butchering councillors at Camp Crystal Lake, renamed Camp Forest Green (appropriate that they kept the “camp” part). Having killed Jason in The Final Chapter, Tommy Jarvis (Thom Mathews) accidentally resurrects him, which seems especially careless considering Mathews did the same thing in The Return of the Living Dead. The guy clearly shouldn’t be allowed near corpses any more than Jimmy Saville. 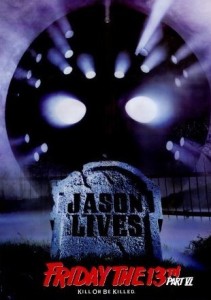 This opening graveyard sequence, in which Tommy stabs Jason’s corpse with a metal fence post that gets struck by lightning and brings him back to life, has an atmospheric Universal Monsters vibe and immediately sets the campy, self-aware tone that apparently inspired Kevin Williamson to write Scream. There are references to Boris Karloff, Dirty Harry, Sean S. Cunningham, A Nightmare on Elm Street and even James Bond, making this the first deliberately funny film in the series and the first to establish Jason as a truly supernatural being.

Sadly this sense of new life is short-lived as the film descends into tired stalk-slash-repeat territory, without even the on-screen gore or nudity to sate fans of the franchise. As in the previous instalment, Jason is shown for too much of the movie, often just walking from place to place. Following the killer around the whole time doesn’t make him any scarier. Still, it’s better than part 5 (which you know is bad because it’s on Netflix) thanks in no small part to three Alice Cooper songs. Ultimately though, it’ll take more than lightning to reanimate this moribund franchise.