A bounty hunter John Ruth (Kurt Russell) is taking a gang member Daisy Domergue (Jennifer Jason Leigh) to Red Rock, Wyoming, to collect the price on her head. But when a  blizzard hits the pair are stuck in a cabin with a rag-tag group of people, at least one of whom has murderous intentions. 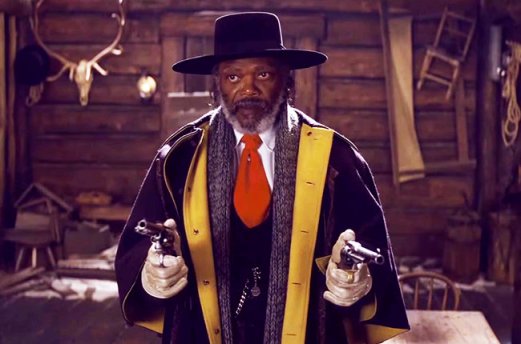 I’m going to get the comparisons out the way – this is the best Tarantino film since Jackie Brown. From Kill Bill onwards all his films have been straight-out revenge films. It’s true that Inglourious Basterds and Django Unchained had a little more substance along the way, but they were all burdened by a sense of inevitability about the bloodbath they were headed towards.

The Hateful Eight is predictably gory, but for the first time since the 90s it doesn’t follow the same revenge narrative. The assortment of characters, including those who fought on opposing sides of the Civil War, lawmen, crooks, a Mexican and a black bounty hunter, have to stay under one roof until the blizzard passes. The way they bounce off each other and their competing allegiances make this a riveting watch. 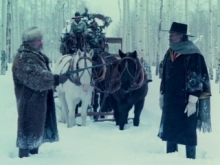 There are superb performances from the entire cast. Jason Leigh is terrific as the gross Daisy Domergue, spending most of the film covered in blood. Meanwhile Tim Roth plays an English version of Christoph Waltz from the last two Tarantino films, matching the Austrian’s aplomb. Samuel L Jackson owns the film’s central role, and Kurt Russell more than compensates for his role in Tango and Cash. There are no weak links in the cast that bring this fizzing screenplay to life.

From the opening chords of Ennio Morricone’s superb score this had me hooked, and the film’s visual quality is also superb. Like Reservoir Dogs it’s mostly set in one location, as our characters try to work out who they can trust. It doesn’t feel as fresh, and lacks the sudden narrative surprises created by Dog‘s jumpier chronology, but this is the closest Tarantino has got to his 90s standard in years.

Thoroughly enjoyable, it’s a relief The Hateful Eight got made – Tarantino almost didn’t bother after someone leaked the script. Hopefully this indicates a return to form for the director – but I won’t hold my breath.

2 responses to “The Hateful Eight”