In the snowy Bandrikan mountains a group of holiday makers are left stranded in a hotel during an avalanche. It then switches from The Hateful Eight to Murder on the Orient Express as they board the next train East. En route kindly governess Miss Froy (May Whitty) goes missing, but no-one except Iris (Margaret Lockwood) seems to recall seeing her. 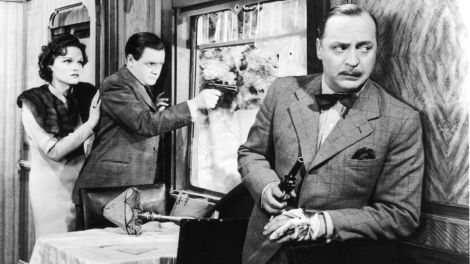 The tone is much lighter than much of Hitchcock’s other work, with many scenes played for laughs, including  Charters and Caldicott (Basil Radford and Naunton Wayne), close friends (or a couple?) who are desperate to get home for the final day of the test match, and light-hearted musician Gilbert (Michael Redgrave) who gets involved seemingly only to liven up a long journey. There are also plenty of funny-accented foreigners, but the joke is more often on the posh Brits and their behaviour abroad. Some things never change.

It’s often witty and clever, and like His Girl Friday the funny lines often come so quickly and are played so straight it’s easy to miss them. And it lacks the suspense of which Hitchcock would later become a master, in spite of having mystery in abundance. But it’s technically impressive, with excellent miniatures used to stand in for expensive aerial alpine photography, and surprisingly convincing exterior of moving train action.

With an eclectic cast of characters, clear storytelling and an intriguing plot that keeps you guessing, this is an enjoyably work from Hitchcock which, like Family Plot and Waltzes from Vienna shows he’s more than capable of bringing levity to the screen.

2 responses to “The Lady Vanishes”