X2 AKA X-Men 2 AKA X-Men United, a title that was fortunately ditched presumably because it sounds like a football team, is the second instalment of the X-Men franchise. Three years after Bryan Singer rescued the superhero movie from its Batman & Robin-shaped hole, the director is back along with Magneto (Ian McKellen), Xavier (Patrick Stewart), Wolverine (Hugh Jackman) and… the other ones.

Released in 2003, X2 is generally considered the best film of the trilogy, and it’s easy to see why. It builds on the strengths of its predecessor, with better action, effects and drama. There’s never a dull moment in its 134-minute running time, even managing something resembling emotional pull. The franchise’s interesting themes are stronger still, tackling the issues of discrimination, civil rights and even homosexuality. Also evident is the film’s post-9/11 resonance, with broad but admirable digs at the Bush administration and the news media. Not to mention that it’s hugely entertaining, delivering romance, adventure and more freaks than an episode of Deal or No Deal.

“This was just cream a second ago.”

The weaknesses of the first film are present too, but don’t get in the way quite as much. Secondary characters are still underwritten, Halle Berry is still dressed as Laurence Llewelyn-Bowen and Cyclops (James Marsden) and Jean Grey (Famke Janssen) are still the most boring couple since Gwyneth Paltrow and Chris Martin. Meanwhile the development of Iceman (Shawn Ashmore) seems only to stretch as far as bizarre scenes in which he’s eating ice cream or kissing someone who’s dressed as his own mother. But Mystique (Rebecca Romijn) gets to really impress and Hugh Jackman truly owns his cigar-chomping, claw-wielding, sideburn-having character. 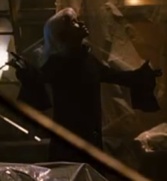 X2 is something quite rare, it’s a good sequel. In fact it surpasses the original as a well-rounded comic book flick. Like the best Marvel movies, it feels like a comic without being overly cartoony, remaining sincere but fun from start to finish.