Swordfish is a 2001 action movie starring Hugh Jackman (young), Halle Berry (topless) and John Travolta (awful). Jackman pretends to be a computer hacker named Stanley Jobson, who must work for a deranged terrorist (Travolta) in order to win custody of his daughter. Or something.

How did a film so bad attract such a top cast? And by that I mean top-tier rather than top talent. Well, Halle Berry was attracted by $2m, plus $500,000 to go topless (that’s $250,000 per breast). Hugh Jackman plays “the most dangerous hacker in America” – and by “dangerous” they mean “implausible”. And I have no idea what John Travolta is doing, but he seems to be in a movie all by himself. His costumes are utterly unsupportable, particularly a shades-beret-goatee combination that makes him look like Dom Joly pretending to be a beat poet. 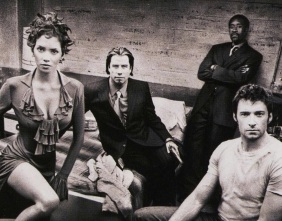 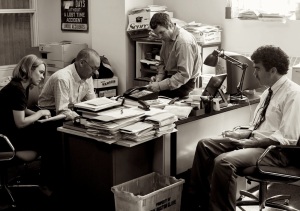 But the cast cannot be blamed, unless you consider monetary greed and contempt for the audience to be somehow blameworthy. After all, they’re stuck with dialogue like: “Someone’s cock’s liable to end up on the block on this one, and I promise you it won’t be mine,” and “We have a strong wind condition.” When Halle Berry first meets Stanley Jobson(!), she greets him with the immortal line: “For someone the NSA has listed as the most dangerous hacker in America, you sure don’t look like much.” What does she expect the most dangerous hacker in America to look like? 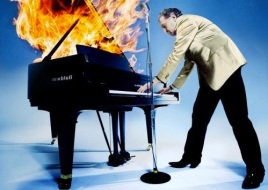 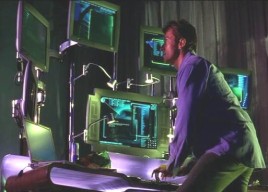 Dominic Sena’s directing is just as bad, choosing to shoot everything like a sex scene. Even the violence? Especially the violence. It all looks so unbelievably tacky, from the sports cars to the women. Then there’s the hack montage. Not a hackneyed montage, though Swordfish may be the most shameless Matrix rip-off ever made – and that’s saying something. No, I’m talking about a montage of Hugh Jackman hacking, set to rubbish techno music. He’s hacking against the clock. He’s hacking and sweating. He’s hacking and drinking to steel his nerves. He’s hacking and dancing. He’s hacking while standing up, like a nerdy Jerry Lee Lewis.

All this suggests a certain level of parody, but having watched the first five minutes of the director’s DVD commentary (the actors must have all been busy), I can confirm that Sena seems to take it all quite seriously. So bang goes that theory. Really, Swordfish is just a schlocky “lads movie”, with its holy trinity of sexism, sadism and racism – if Finnish people are a race. It’s one of the stupidest films I’ve ever seen, and I’ve seen Mamma Mia! It’s as mindless as those adult colouring books. It’s more over the top than Over the Top.

The commentary also reveals that John Travolta turned the film down no less than six times, but was eventually swayed by Dominic Sena’s artistic vision, which is the best joke in the entire film. But who knows. Maybe Travolta was convinced by loads of money. Or maybe he was convinced by Season of the Witch director Dominic Sena. Dominic Sena certainly seems to think so. I guess it will have to remain one of the great mysteries of cinema.

One response to “Swordfish”